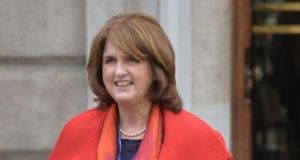 Joan Burton criticised the disproportionate maleness of the current government negotiations on Saturday, while speaking at the Women In Media conference in Ballybunion, Co Kerry.

Joan Burton criticised the disproportionate maleness of the current government negotiations on Saturday, while speaking at the Women In Media conference in Ballybunion, Co Kerry.

Opening the weekend’s political symposium panel, the Tánaiste spoke about women being excluded from the government negotiation process, the misogyny and abuse female politicians dealt with during the recent general election, and spoke about a “vulgar, crude, and demeaning” item on the The Late Late Show during the general election that analysed leaders’ body language and gestures.

On negotiations to form a government, Ms Burton referenced Enda Kenny’s previous comments that he would like to see a 50/50 cabinet split saying: “You wouldn’t think that with the comings and goings of the last six weeks… Women TDs are not having much of a role in the protracted post-election phase.”

Ms Burton said that as far as she was aware the Fianna Fáil team negotiating at the moment is all male, while Frances Fitzgerald is the sole woman on the Fine Gael negotiating team.

“This is very disappointing, and it suggests a 50/50 cabinet is not on the cards or approaching it any time soon,” she said.

Ms Burton also referenced Miriam Lord’s article in today’s Irish Times, which detailed the fact that thirteen male Independent TDs held a meeting on Thursday agreeing to abstain on the vote for taoiseach, yet the two women involved in that group of independents - Katherine Zappone and Maureen O’Sullivan - weren’t invited.

Speaking about the heightened sexism and misogyny female politicians experience during an election campaign, Ms Burton singled out an item during The Late Late Show on February as particularly hurtful, where behavioural psychologist Dr Peter Collett was invited to offer a so-called “Freudian analysis” of the body language and gestures of four party leaders; Enda Kenny, Joan Burton, Micheál Martin and Gerry Adams.

Ms Burton said Dr Collett “made some remarks about my lip gestures,” and interpreted it as a sign of “early childhood rejection”, which was especially insensitive to her as an adopted person.

She said the presenter Ryan Tubridy “seemed to find the idea amusing,” while Ms Burton said, “I thought it was vulgar, crude, and demeaning.”

The Labour Party leader told a packed room at Kilcooly’s Country House Hotel that she avoided social media during the election as “even the smallest intervention on my part produced pure hate and unbridled misogyny.”

She also criticised tech companies for not doing more to protect victims of hate and abuse online.

“The mega-billionaires of the internet age who guard their own privacy with immense care, are very cavalier… with no regard to the damage or hurt caused to individuals who become the targets of online abuse or hate speech,” she said.

The Women’s Podcast will also present their inaugural Woman to Watch Award in partnership with the conference at a gala event on Saturday night.

Coronavirus: One more death in Republic as expert warns house parties are ‘disaster’ for containment 17:37
Republic pushes to be voice for small states on UN Security Council 17:08
Q&A: What are the sticking points in Government formation talks? 16:59
Dublin Zoo to reopen on Tuesday with a new booking system 16:10
PSNI to start ‘real-time’ deletion of DNA records in September 15:56

1 Coronavirus: One more death in Republic as expert warns house parties are ‘disaster’ for containment
2 George Floyd death: Man shot and killed by law enforcement in Kentucky
3 Six counties free of new cases of Covid-19 over past week
4 Gardaí disperse crowds gathered at coastal beauty spots
5 How lockdown has helped us to save money - and find new ways to spend it
Real news has value SUBSCRIBE