Buncrana tragedy: Pier signage may have been a factor 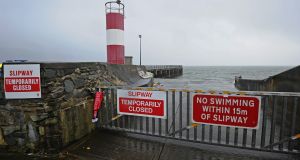 The slipway alongside Buncrana Pier, which is now closed for public admittance. Photograph: Trevor McBride

Insufficient signage warning of hazards may prove to be a factor in any review of safety at Buncrana pier, following the loss of five members of the McGrotty and Daniels families in Lough Swilly last Sunday night.

However, the state of the tide at the time of the incident will have been a contributory factor, according to marine experts who believe it was a tragic accident.

Restrictions on use of chemicals harmful to crustaceans and the marine environment also mean that algae removal on piers, slipways and at popular bathing spots is more difficult and more labour-intensive for local authorities.

Witnesses have said that due to extensive algae, the wheels of Sean McGrotty’s vehicle were unable to gain any grip on the slipway at Buncrana pier at the time of the incident around sunset on Sunday evening.

Donegal County Council has long demonstrated a commitment to its maritime rim, and has been very proactive in developing a water safety ethos, according to Irish Water Safety chief executive John Leech, who has expressed his sincere sympathies to the relatives.

The wide slipway was designed primarily for use by the seasonal ferry between Buncrana and Rathmullan, with depth off it to allow for the ferry’s draught.

The gate at the top of the slipway helps to control the traffic flow approaching and leaving the vessel when docked.

Local authorities are empowered to impose restrictions under bye-laws, but are loath to restrict access to slipways built to provide for safe launching and landing from sea.

One experienced water-user in the neighbouring area says that a previous attempt to keep the gate locked during winter months proved complex to run.

The indented 7,800km-long Irish coast has over 900 points of landing, with Buncrana’s pier on Donegal’s Lough Swilly being just one.

While harbourmasters oversee safety in ports run by port companies, and the six fishery harbour centres are the responsibility of the Department of Agriculture, Food and the Marine, local authorities maintain access to their respective shorelines.

A sign at Buncrana warns people not to swim within 15m of the slipway, but there was criticism this week of inadequate information available for visitors of the risks.

Davitt Walsh, who rescued four-month-old Rionaghac-Ann McGrotty from the sinking vehicle, described the algae on the slipway as “lethal”.

Use by local authorities of a mixture of lime and copper sulphate or nitrogen peroxide-based substances proved to be very effective in clearing slippery algae in the past.

However, greater awareness of the damage posed by chemicals to the marine environment means that power-washing is now the common practice.

Many local authorities employ power-washers to clear steps in popular bathing areas, but the system is very labour intensive. In areas where there is no all-year round activity on water, algae is cleared before the approach of the summer season.

There were reports last week of near-misses over the past few years on Buncrana slipway. The IWS points out that even experienced drivers launching boats can damage cars.

For launching and recovery, it recommends that only four-wheel drive vehicles should be used.

It also recommends that front windows be rolled down, and that all cars operating near water should possess a hammer for breaking glass which can be purchased at low cost from specialist shops.

Donegal County Council, which offered its sincere condolences to the family and friends of those who died, has said it will review the facts once they are established and will “determine if any specific measures need to be taken”.