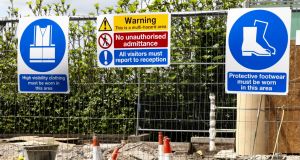 Deaths on construction sites will continue to increase unless smaller employers stop “cutting corners”, the Health and Safety Authority (HSA) has said.

The body that investigates workplace incidents has revealed the number of fatalities on building sites more than doubled last year with falls from heights the leading cause.

“While the message seems to have got through to big construction firms who have improved standards around worker safety, what we are seeing is self-employed and smaller building companies not realising their duty and responsibility to staff, and cutting corners when it comes to health and safety,” said HSA chief executive Dr Sharon McGuinness.

Publishing provisional data for 2019 on Friday, Dr McGuinness predicted incidents and deaths would continue to rise until there was a change of mindset.

“Most deaths are preventable. Generally, incidents occur when safety shortcuts are taken. But the mentality of placing people’s lives in peril in the race to finish a job – or save money – needs to stop. Lives depend on it.”

Figures for the year show there were 46 workplace deaths of all kinds, an 18 per increase on 2018 (39) and the end of a downward trend since 2015. Co Wexford recorded seven deaths, the highest per county.

While agriculture continues to be the most dangerous environment, construction has recorded the largest increase – 12 deaths compared to five the previous year.

Construction numbers last spiked at 11 in 2015 when falls from heights were again the main cause. Since 2008 there has been an average of nine deaths per year in the industry.

Last July, the Construction Industry Federation (CIF) – which works to promote site safety – said it believed the sector was on course to record its safest ever year with just two fatalities at that point. However, a sudden increase in incidents followed – the HSA said 75 per cent of deaths occurred in the second half of the year.

A further 940 “non-fatal incidents and dangerous occurrences” were reported to the authority by the sector.

Criticising small employers in particular, Dr McGuinness said working at height would be the focus of its safety campaign during 2020.

Despite the worrying trend in construction, agriculture remains the most dangerous working environment with 18 deaths, despite ongoing campaigning in the farming sector in particular.

Almost three quarters of these involved people aged 60 and over, reflecting the older generation in the sector. Dr McGuinness appealed to them to “recognise their limitations as they age”.

“Farmers think it’ll never happen to them but sadly as we have seen, all it takes is a few seconds for a serious injury or death to occur.”