State to open its third consulate in China 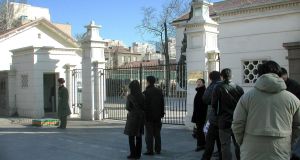 The Irish Embassy in Beijing. The Department of Foreign Affairs is launching a strategy document aimed at growing two-way trade between Ireland and the Asia-Pacific region from €56 billion in 2018 to €100 billion by 2025

The Government is to open a third consulate in China as part of a new diplomatic and trade strategy aimed at expanding the State’s presence in the Asia-Pacific region.

On Thursday, the Department of Foreign Affairs is launching a strategy document – the first focused on growing the country’s presence in the region in more than 20 years – aimed at growing two-way trade between Ireland and the region from €56 billion in 2018 to €100 billion by 2025.

There are already two consulates in China, in Shanghai and in Hong Kong, in addition to the Embassy in Beijing. The third consulate – the location of which has yet to be decided by the Government – will bring the number to 17 in the Asia-Pacific region.

Guangzhou, China’s third largest city, and Shenzhen, a financial and shipping centre, are among the cities under consideration but no formal decision has been made on the location yet.

The diplomatic push in the Far East is part of the Government’s “Global Ireland 2025” strategy to double the footprint of State offices and agencies around the globe.

Ireland’s new Embassy in the Philippines, announced in 2018, will open later this year in Manila, bringing to six the number of diplomatic missions in southeast Asia.

The increased diplomatic presence is needed, according to the department, to serve the Irish community in the region which numbers an estimated 100,000. There are an estimated 50,000 citizens of Asia-Pacific countries living in Ireland.

“Ireland suffers from a lack of visibility in Asia. We’re looking to raise this through public diplomacy and co-ordinated action across government,” says the department.

Ten new diplomatic missions opened by the Government over the past two years cost €4.6 million in 2019. That includes €1.7 million in salaries and €1.2 million in office rental costs.

Expanding into the wider Asia-Pacific region is intended to take advantage of closer trading relations between the EU and the region and to develop post-Brexit opportunities for the country given that the region has six of the 20 largest economies in the world.

“The strategy is the most significant effort by the Government to step up its relations with the region in over 20 years,” said the department.

Among the main sectors being targeted for the increase in trade with the region are financial technology, agribusiness, education and tourism.

The department is announcing a doubling in the number of working-holiday visas issued to Japanese students every year from 400 to 800.

Efforts to enhance the country’s international profile coincides with the Government’s efforts to win a seat on the UN Security Council for the 2021-22 term in the June election this year.