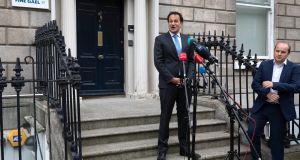 Taoiseach Leo Varadkar announcing on Friday, outside Fine Gael headquarters in Dublin, that the party’s members had voted in favour of the programme for government. Photograph: Damien Eagers/PA Wire

The make-up of the new Fianna Fáil-Fine Gael-Green Party Cabinet will be keenly watched, with work not yet fully completed on the exact structures of the government departments the new batch of ministers will occupy.

Sources said a “number of issues” are outstanding – but the broad outline has emerged. Fianna Fáil leader Micheál Martin said the parties were “more or less” settled on the final allocation of jobs.

Fianna Fáil and Fine Gael will each have six full Cabinet ministers and the Greens will have three. Each party will also have a so-called “super junior” minister. A super junior is a junior minister who sits at the Cabinet table but does not have voting rights.

Office of the Tánaiste

Mr Martin will become taoiseach and the Fine Gael leader Leo Varadkar will take over the position of tánaiste. Mr Varadkar is tipped to take over a beefed-up Department of Jobs, potentially taking the tourism element of the Department of Transport, which will be reconfigured. He will also have an Office of the Tánaiste in Government Buildings.

Minister for Finance Paschal Donohoe is set to remain in position with Fianna Fáil’s Michael McGrath taking over the Department of Public Expenditure and Reform.

Fine Gael is also expected to hold on to the Department of Foreign Affairs, with Simon Coveney remaining in situ in Iveagh House.

Which party gets the Department of Health was not yet clear on Friday night, but it is expected that Simon Harris, the current senior minister in that department, will remain in Cabinet.

It is understood that Fine Gael will hold on to the Department of Justice. Outgoing Minister for Business Heather Humphreys is also seen as likely to remain at Cabinet.

Those tipped for promotion from within the Fine Gael ranks are Meath East TD Helen McEntee, the outgoing Minister for European Affairs, a junior minister slot, and Galway West TD Hildegarde Naughton, who chaired the Oireachtas all party committee on climate change in the last Dáil.

Internal Fine Gael speculation is that either Ms McEntee or Ms Naughton will take a full Cabinet position, with the other taking a super junior slot.

Fianna Fáil will take the Department of Housing, and Darragh O’Brien, the party’s housing spokesman, is tipped for that slot, although Offaly TD Barry Cowen was also previously housing spokesman.

Some sources said Fianna Fail was in line for the Department of Agriculture but others said Fine Gael may hold on to it. Fianna Fáil deputy leader Dara Calleary will hope for a substantial portfolio too and it was not clear on Friday night if a full Cabinet post for the higher education sector will be created as Mr Martin had previously promised.

There was intense speculation within Fianna Fáil on Friday night on the future of Dublin Bay South TD Jim O’Callaghan, with suggestions he could be left out of Cabinet if Fine Gael takes the justice portfolio as expected.

Fianna Fáil will take the position of government chief whip, with Dublin West TD Jack Chambers mentioned in connection with that job. Fine Gael will be allocated the position of deputy whip and the Greens will get assistant whip. The Department of Rural Affairs is slated for abolition, although it is not clear where its responsibilities will be transferred to.

Mr Martin on Friday night confirmed that the position of attorney general will also be rotated between Fianna Fáil and Fine Gael, in tandem with the position of taoiseach rotating.

It is not yet clear which parties will take the Department of Education – although Green Party leader Catherine Martin is linked with it and was education spokeswoman in the last Dáil – and Social Protection.

The Greens are also linked to a newly-created Department of Children, Disability and Equality, with Dublin West TD Roderic O’Gorman seen as one of the frontrunners for the third Green Cabinet position after Mr Ryan and Ms Martin.

It is understood, however, that responsibility for the direct provision system will remain within the Department of Justice.

A new Department of Climate, Energy, Transport and Natural Resources will be created, although its name is expected to be tidied up. Mr Ryan is widely expected to get this job. A super-junior minister for roads will also be appointed to balance out the Greens but it is not clear yet if Fine Gael or Fianna Fáil will take this.

Minister for Housing Eoghan Murphy is not expected to be a senior or junior minister and is instead tipped to take on a new party role linking the Fine Gael organisation and the Fine Gael parliamentary party.