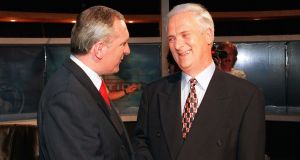 The British government was concerned about Bertie Ahern becoming taoiseach after the 1997 general election with London’s ambassador to Ireland saying the then Fianna Fáil leader’s actions to undermine the Irish government’s policy on Northern Ireland were “potentially dangerous”.

New files released by the National Archives in London show the British viewed Mr Ahern with scepticism and were instead in favour of Fine Gael’s John Bruton continuing as taoiseach after the 1997 election.

An “annual review for 1995” written by the British ambassador to Ireland Veronica Sutherland in January 1996 said that Mr Ahern’s leadership of Fianna Fáil, then in opposition to the rainbow coalition, had been weak.

“All being well, the Coalition can look forward to another 18 months or so in power before the next General Election, due in 1997. On present performance, there is little to fear from the Opposition. Bertie’s Ahern’s leadership of Fianna Fáil has been lacklustre, and his attempts to undermine the Irish government’s policy on Northern Ireland potentially dangerous,” she wrote.

Edward Oakden, Mr Major’s private secretary for foreign affairs, said in a letter during the period: “Over time the prime minister has built up a very good and productive relationship with John Bruton. It has had its bumps. But the prime minister has a regard for the risks which Bruton – like us – has taken.”

Mr Ahern however, was viewed with more scepticism. “Given Mr Bruton’s sympathy towards the UK, it is in our interest that he should remain in position,” said Ms Sutherland.

A year earlier, in February 1995, Mr Ahern had lunch with the previous ambassador David Blatherwick, during which he said he was finding opposition frustrating and wished his predecessor would avoid public life.

“Albert Reynolds was mistakenly trying to stay in the political limelight: he should concentrate on a new life in business (Ahern spoke of Reynolds without rancour or anxiety, but as a man of the past),” said Mr Blatherwick in a memo.

After the London Docklands bombing in February 1996, Mr Ahern told Ms Sutherland that he would be doing some “tough talking to Gerry Adams, but was unsure whether this would have any effect.

“In his view Adams no longer had any influence over the IRA,” said Ms Sutherland.

The relationship between the British and the Irish at the time varied between warmth and scepticism, according to the ambassador.

“In general the Irish attitude to us remains ambivalent – and volatile. They are suspicious of our motives, and quick to blame us for set-backs. Incidents of all kinds can provoke a spate of invective from ministers, officials and press commentators; football hooliganism; the release of private (Lee) Clegg; the treatment of Irish prisoners in Britain; nuclear power; Irish steel.”

She said that at the same time, the relationship was capable of huge warmth, illustrated by the positive reception given to the Prince of Wales during a visit to Ireland in 1995.