Eamon Ryan: ‘The current system is not working . . . it’s ripe for change’ 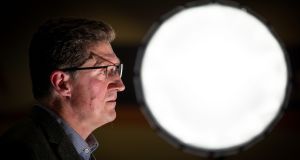 Green Party leader Eamon Ryan: ‘People get that there is a crisis. What we have to do is present the solutions.’ Photograph: Tom Honan/The Irish Times

In this change election, nobody is offering more change than the Greens. But Eamon Ryan has found it hard to get past the Sinn Féin steamroller, hard to make his voice heard, hard to make the case for his party’s message of change.

Or maybe voters simply don’t want to hear it. Either way, Ryan stands by his vision for a greener Ireland.

“My job is to explain to [voters] that rather than seeing it as a cost, it’s also an opportunity. It’s a better home. It’s a better community,” the Green Party leader says in an interview with The Irish Times. “People get that there is a crisis. What we have to do is present the solutions. I find that message working.”

Where would the Dublin Bay South TD like to see things done differently?

“Our transport system, our land use system, our energy system and our wasteful industrial system,” he says, all need to change if the State is to move “towards a sustainable future”.

Ryan continues: “You use it as an opportunity to create a better economy, a better sense of community, so people aren’t commuting three to four hours a day, which hundreds of thousands are doing.

“You use it to create a new system of renewable energy that’s here for the next 500 years if we get it right, you use it to start paying Irish farmers properly. And this nonsense that the green agenda is a risk to rural Ireland or a risk to Irish farmers – it’s the exact opposite. The current system is not working, therefore it’s ripe for change.”

But the Green Party’s message of change hasn’t caught on, and Ryan knows it. Perhaps this is because it requires difficult decisions in specific areas that will inconvenience people.

“You’ve got to link housing and transport. Most of the houses are going up in the long distance outskirts of Dublin, that’s where the building is taking place, where people don’t have public transport options to take them in, they’re stuck in traffic for hours every day.”

That’s fine. But there are 33 major roads projects due to begin over the next five years. Which ones do you cancel?

“You’d go through it on a case-by-case basis and you do it on the basis of proper analysis. But we have 50 roads projects on the go at the moment – we don’t have a single public transport project on the go. Not one,” he says

Ryan loves thinking big. He speaks fervently about setting aside half of Ireland’s sea area for marine conservation, with no fishing, and putting hundreds of offshore windfarms there creating the potential to power the northwest of Europe.

All this, he says, has to be decided in the next year or two. “We start now,” he says.

But elections are often about more quotidian, local concerns.

“When I go out and say this to people, they’re not shaking their heads, and saying please don’t do that – they recognise it makes sense for our country.”

On coalition preferences, he is an open book. The scale of the climate crisis is so great, he says, that the Greens will work with everyone and anyone.

On his outspoken Mayo candidate Saoirse McHugh, who is vehemently against coalition with Fine Gael or Fianna Fáil, Ryan is relaxed.

“I’ve said this to her, ‘Your neighbours in Achill will probably vote for Fianna Fáil and Fine Gael – we need to get them on board as well.’”