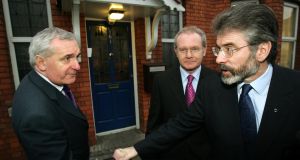 One of the most senior military commanders in Northern Ireland during the Troubles believed the IRA’s 17-month ceasefire in the middle of the 1990s benefited terrorists.

The period was used to improve the IRA’s intelligence and recruit volunteers while “punishment” murders kept members in practice, according to files released by the National Archives in London.

The files show how the British believed the punishment beatings and killings that continued during the ceasefire between August 1994 and February 1996, and were publicly claimed to be related to drugs, were the biggest threat to the ongoing peace process and that the IRA was responsible.

In a memo from January 1996, a few weeks before the ceasefire was broken by a bomb in the London docklands, the prime minister John Major’s private secretary Roderic Lyne details a meeting he had with Roger Wheeler, director of military operations in Northern Ireland, during which the officer explained that the army and police were worried about the build-up of tension.

“Roger said that, for the time being, PIRA were primed to return to full-scale violence. In some ways, their military effectiveness had benefited from the ceasefire. They had improved their intelligence, targeting and recruiting. The drug murders had kept some of the units in practice and had shown that they were still very effective,” Mr Lyne’s memo stated.

“Roger thought that the calculation of PIRA leaders was that they could sustain the readiness of their volunteers to fight for about another six months but that thereafter they thought it would be increasingly difficult to persuade the volunteers that it was worth going back into action.”

There had been an order given by Sinn Féin’s Martin McGuinness that the drug murders were to cease, said Mr Lyne which would be “an interesting test of PAC [IRA Army Council] control”.

Statistics from the time show a spike in punishment shootings and assaults before the ceasefire and after. In the 16 months before the cessation, there were 74 attributed to republicans, compared to 176 for the period of the ceasefire.

The continued violence was focused on by the British government as reason to cast doubt on the republican movement’s commitment to peaceful negotiations. In a brief to the prime minister ahead of a meeting with the independent body dealing with decommissioning, the punishment murders were said to be the clearest threat to the peace process.

“We are in no doubt that the IRA are responsible and these murders have been approved at the highest level in the republican movement. The Irish government agrees and shares our concern,” said the note from the British.

The prime minister told the international body that the attacks had happened regularly before the visit in November 1995 of US president Bill Clinton but had stopped in the lead up to his arrival.

“These operations were under the direction of the central Army Council. Some at least of the drug-related attacks were to stop others moving in on the IRA’s drugs rackets and territory,” said a letter from Edward Oakden, Mr Major’s private secretary for foreign affairs.

Mr McGuinness denied at the time that Sinn Féin condoned, advocated or approved of the attacks in a meeting with the British and Irish governments. Gerry Adams said they were very concerned at the killings and the way they were being used as a way of attacking Sinn Féin.