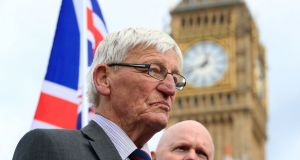 Former British soldier Dennis Hutchings (left), who has been charged over the fatal 1974 shooting of a man in Northern Ireland, takes part in a protest to call for an end to prosecutions of veterans who served during the Troubles, on Horse Guards Parade, London. Photograph: Gareth Fuller/PA Wire

Hundreds of army veterans have marched in Westminster alongside a former soldier who is facing prosecution in connection with the death of a vulnerable man during the Troubles.

Dennis Hutchings (76), is due to stand trial on charges linked to the shooting of John Pat Cunningham, a 27-year-old with learning difficulties who was killed in disputed circumstances in Co Armagh in 1974.

Mr Hutchings is accused of the attempted murder of Mr Cunningham, who was unarmed. A court has heard that when the victim was shot he was running away from a British Army patrol because he had a fear of men in uniform.

Mr Hutchings, of Cawsand, Cornwall, is also facing a charge of attempting to cause grievous bodily harm to Mr Cunningham.

Campaign group Justice For Northern Ireland Veterans organised the solidarity march to protest at a number of recent investigations into the conduct of soldiers stationed in Northern Ireland during the conflict, which they say has been an unfair witch hunt.

The march was met with a counter demonstration by campaigners holding a silent vigil and carrying placards which read “I am John Pat Cunningham”. At certain points, there were verbal clashes.

As the group of ex-soldiers marched past parliament, Mr Hutchings threw his military medals at the building.

One of the march organisers, Alan Barry said: “If you let terrorists go free from jail, you cannot then go and prosecute the very people who were sent in to fight that dirty war in the first place, and that was us.”

Mr Hutchings said: “Today went very well. I hope it shows the government they have to do something about this absolute travesty of justice.”

Many of the veterans wore their former military uniforms, decorated with medals they were awarded for their time in Northern Ireland, and also carried Union and Northern Ireland flags.

After congregating in Horse Guards Parade, they marched to Buckingham Palace, where they sang a rendition of God Save the Queen, before marching to Nelson’s Column in Trafalgar Square and then arriving at parliament.

Paul O’Connor, from the Pat Finucane Centre, which works with the Cunningham family, was among those counter-protesting.

He said: “We’re here today to remind people of who the victim was. It was John Pat Cunningham.

“I know that the British Army has had a culture of impunity over the years and they believe that they are not subject to the rule of law like anyone else, but they are - or they should be.”

Mr O’Connor claimed some of those involved in the rally were abusive toward the counter-protesters.

Other counter-protests took place at locations in Northern Ireland including Belfast, Derry, Strabane and Co Armagh.

The director of public prosecutions Barra McGrory has previously denied any bias against soldiers in decisions on whether to prosecute over historical deaths.

In January, he said: “The simple and clear reality is that we deal with cases as they are referred to us, in accordance with the Code for Prosecutors. There is no imbalance of approach within the PPS [Public Prosecution Service].”