Deceased believed daughter was murdered but nobody ever charged over disappearance 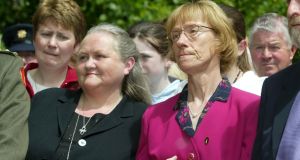 Josephine Pender (left), mother of missing woman Fiona Pender, with Mary Phelan, sister of missing woman Jo Jo Dollard, at the unveiling in May 2002 of a monument to missing people made by Kilkenny sculptor Ann Mulrooney. File photograph: Dylan Vaughan

A candle of hope was placed on the altar at Josephine Pender’s funeral in memory of all missing people.

Josephine Pender, mother of missing Tullamore woman Fiona Pender, had campaigned tirelessly for information on her daughter following her disappearance in 1996.

Mrs Pender, who passed away at the age of 68, was described as a friend and hero by local priest Fr Shane Crombie.

Emer Condron - a friend of Fiona, who was aged 25 and seven months pregnant when she went missing in August 1996 - brought a candle to the altar at the beginning of the funeral Mass in St Colmcille’s Church, Durrow, Co Offaly.

Mourners, including Mrs Pender’s son John and sister Mary, were told it would remain lit during the ceremony as a beacon of hope for all the families of missing people.

Josephine Pender’s son Mark died in a motorcycle incident in 1995, Fiona went missing the following year and her husband Sean died in 2000.

In his homily, Fr Crombie said: “In the face of so much trial, so much pain, so much suffering, Josephine was and is a true hero.”

He said she had become the perfect symbol of love, faith, patience and endurance.

“In doing so Josephine has given so much hope, so much courage, so much strength to countless people, not just here but beyond the boundaries of our parish,” said Fr Crombie.

“The wider community of missing people played a huge part in her life.”

A letter written in 2011 to her missing daughter was read by Emer Condron, which said the family would never give up the search for Fiona.

“I greatly regret not being able to help you on the birth of your little baby, my grandchild,” Mrs Pender had written.

Josephine Pender was buried in the cemetery adjoining the church in Durrow, alongside her husband and son.

The deceased always believed her daughter was murdered and both herself and the Garda identified a chief suspect, but nobody has ever been charged in connection with her disappearance.