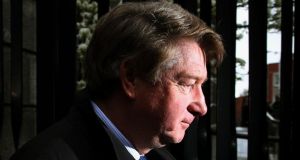 Solicitor Brian O’Donnell. Mr O’Donnell is expected to travel straight to the Bank of Ireland AGM when he leaves Gorse Hill in Killiney, Dublin for the last time tomorrow morning, in order to criticise the bank’s management. Photograph: Brian Lawless/PA Wire

Solicitor Brian O’Donnell is expected to travel straight to the Bank of Ireland AGM when he leaves Gorse Hill in Killiney, Dublin for the last time on Wednesday morning.

Mr O’Donnell and members of the New Land League are understood to have secured voting rights at the AGM, where they are expected to publicly criticise the management of the bank over its repossession of the Killiney mansion.

An eviction notice served on Mr O’Donnell and his wife Mary Patricia expires at midday on Wednesday, after a Supreme Court challenge taken by the O’Donnells in relation to the order to leave his former home was ruled unsuccessful earlier today.

The O’Donnells spent a quiet last day in the €7 million mansion. Their adult children Blaise and Alexandra could be seen coming and going a number of times during the day, at one stage arriving with a young man believed to be one of their male siblings, Bruce or Blake.

Brian O’Donnell appeared just once, to fix a malfunction in the electronic gates, telling reporters “no interviews, no interviews”.

Jerry Beades, spokesman for the New Land League, said the O’Donnells were “traumatised” by the handling of their Supreme Court request to appeal the decision .

Mr Beades said the family had expected to be told in advance of the media if they had been granted permission to make their appeal.

However, he said the family had not been told of the decision until 4.30pm, when an email was received - some 30 minutes after the media were informed.