Brexit remains a divisive issue for Irish in London

While the result was disappointing for some, others have no regrets about voting ‘leave’ 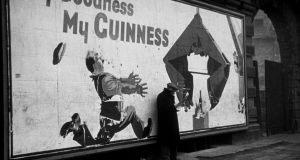 Elephant and Castle in south London: in the 1950s, the area was filled with Irish men working on building sites and Irish women working in factories. Photograph: Bert Hardy/Picture Post/Getty Images

Painted on a wall in Southwark’s Central Market is a recipe for potato bread, which carefully explains how much flour and baking powder is needed for the traditional loaf. The mural is not some random graffiti but a work of public art in honour of the Irish community which once dominated the area, but has since moved on.

Nearby, in a community centre, Patrick Griffin and his mother Eileen reflect on the outcome of the Brexit referendum. Having moved to London in 1959, she is frail but she was determined to vote last June.

“The main thing for my mother was seeing the integration [the EU brought]. She has seen England change since when she came here when there was animosity,” says Patrick. “The EU made the role for Irish people in this country easier.”

Watching the result on the television the day after the vote, Eileen, a lifelong Labour voter, had become upset. “I think Europe has been good for the UK. Of course, I was naturally disappointed,” she said.

Eileen is one of a group of Irish pensioners who gather frequently for tea and a chat at the Southwark Irish Pensioners’ Project in the south London district.

In the 1950s and 1960s, Elephant and Castle was filled with Irish men who worked on building sites and Irish women who worked in factories. Today, just a fraction of them remain.

The Brexit vote was a disappointment for the former rigger who worked on the first three Star Wars films from 1976 to 1983. “For Ireland as well, it’s better to be in than be on your own. God knows what will happen now,” he says.

In the run-up to the referendum, the Irish vote was canvassed by the Remain side with a campaign group called Irish4Europe lobbying to stop a Brexit. In the 2011 census more than 400,000 people identified themselves as Irish-born in the UK. Irish citizens, along with those from Malta and Cyprus, were the only citizens of other EU member states who were allowed to vote in the referendum.

There were frequent complaints, however, that objective information about both sides of the debate was not circulated; this led some to steer clear of the polling booths.

“It went over my head a little bit, to be honest. I would have liked to have known more about it before I voted. It’s as simple as that really,” says Dee McDonnell, who moved to London from Sligo nearly 50 years ago.

While many presume that most British-based Irish voted to Remain because of their links to Ireland or because they are seen traditionally as Labour supporters, there is no solid data to say how they decided.

However, they reject comparisons between their own arrival decades ago as immigrants and the arrival now of a generation of immigrants, mostly from eastern Europe.

“There was room when I came here in the 1950s. There was plenty of work. There was no problem with that. But now they come along and get their handout,” says one, who declines to give his name.

“You have got to give them a place to live, a handout, and they have not put a penny in the pot.”

Others point to Ireland’s historical links with Britain, which they see as marking them out as different and more aligned with Commonwealth countries in their place in Britain, such as having the vote.

Dave Hicks, who comes to the Southwark centre once a week, has no regrets about his “leave” vote despite the political upheaval that has ensue.

“Although I am not against migration as such, I feel it has become a flood which was not controlled. Whereas in Australia, they still have migrants but it is much more controlled,” he says.

Once a Labour voter, he later gravitated to the Liberal Democrats before voting for the Conservatives and eventually leaving them because of “anti-Christian” values espoused by David Cameron.

“If [Brexit] does not happen, then I will be one of the ones who will be up in arms,” he says.