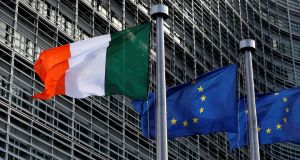 Dr Aodh Quinlivan, of University College Cork, told the committee hearing at the House of Commons that Brexit could have a major impact on local Government on the island of Ireland. Photograph: Francois Lenoir/Reuters

Brexit could lead to differing standards on either side of the Border as local authorities in Northern Ireland could move away from various EU directives, an Irish academic has told a selected British parliamentary inquiry.

Dr Aodh Quinlivan, director of the centre for local and regional governance at University College Cork, told the committee hearing at the House of Commons that Brexit could have a major impact on local Government on the island of Ireland.

Currently, there is ongoing co-operation and collaboration between local authority executives in the Republic and North through the all-island forum which was set up in 2002 to continue cross-Border co-operating dating back to co-operation Ireland linkages in the 1980s, he said.

“Such co-operation arrangements could become more problematic in the future if Brexit leads to the reinstatement of a hard Border. It is therefore likely that the all-island forum will play an even more important role over the coming years,” he said.

Dr Quinlivan told the All Party Parliament Group for District Councils Inquiry, consisting of members of both the House of Commons and the House of Lords, that Brexit could result in local authorities in the United Kingdom moving away from EU standards in several areas but particularly on environmental issues.

“Brexit could also lead to local authorities in the UK moving away from EU directives in a host of areas, especially relating to the environment, for example, the EU landfill directive,” he told the committee chaired by Conservative MP for Rugby, Mark Pawsey.

“There is potential for confusion here as different standards may apply on either side of the Border between the Republic of Ireland and Northern Ireland. This could be a real barrier to cross-jurisdictional co-operation. “

However, Dr Quinlivan said that he was encouraged by recent comments by the mayor of London, Sadiq Khan, when he called on the British government to extend devolution of power, including fiscal powers, to London in the wake of the vote to leave the European Union.

The main representative body for local authorities in the UK, the Local Government Association, has followed suit and argued that Brexit could be an opportunity for extra powers to be devolved from the EU to local government, he told the committee.

“The Irish local Government system should follow these developments with a keen interest. Historically, there are parallels between local government in Ireland and the UK, with the two countries having the most centralised models in Europe.

“Greater devolution of powers in the UK would inevitably lead to a call for the same to happen in Ireland – which would be a healthy development,” said Dr Quinlivan who was one of a number of European academics and researchers to address the committee.