‘Grace’ foster family inquiry to include other 46 children 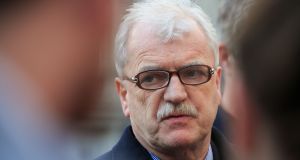 Finian McGrath: has amended the terms to clarify the chair of the commission has the authority to examine the treatment of others who received respite care from the same foster family. Photograph: Gareth Chaney Collins

A commission of investigation into the case of “Grace” will be expanded to include the other 46 children who were in the care of the same foster family in the southeast.

Minister of State for Health Finian McGrath is to bring forward revised terms of reference for the inquiry after Opposition TDs insisted the proposed scope was too narrow.

Mr McGrath has agreed to prioritise the case of Grace, an intellectually disabled young woman who is alleged to have been abused at the foster home for more than 20 years. He has amended the terms to clarify that the chair of the commission has the authority to examine the treatment of others who received respite care from the same foster family.

Senior Counsel Marjorie Farrelly will be asked to bring an initial module to Government within 12 months regarding Grace’s case and then to report on what other cases should be examined. She will be also be given the scope to examine documentation as far as back as 1992, which Opposition TDs believe is crucial to the case.

Under the amended terms, Ms Farrelly will have the authority to examine the protected disclosures made by two whistleblowers surrounding the Health Service Executive’s treatment of them.

The Minister agreed to amend the original terms of reference after meeting the two whistleblowers on Tuesday night. A Cabinet meeting was held over the phone to agree the changes. Mr McGrath will bring a revised draft to the Dáil and the Seanad today for a final vote on the commission.

Fianna Fáil, Sinn Féin and Independent TDs had all met him seeking changes to the inquiry.

Speaking in the Dáil on Wednesday, Fianna Fail TD John McGuinness sought a series of changes to the terms of reference. He said there were many other young children whose cases needed to be examined, citing a 12-year-old girl who lived with the foster family.

Mr McGuinness said: “The child was battered, bruised, financially abused and sexually abused anally so that today, as an adult, she leads a life of pain and suffering.”

Fine Gael TD John Deasy also claimed the HSE had engaged in a conspiracy in an attempt to hide the extent of the Grace case or its problems handling it. Under Dáil privilege, Mr Deasy said the agency had misled the Public Accounts Committee on the case.

“They told us they had apologised to Grace and her mother. They had not.

“So was this a conspiracy, a cover-up, yes it was.”