‘Grace’ inquiry to get new terms of reference, says Kenny 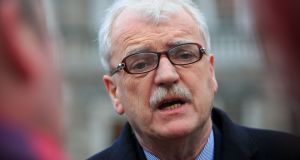 Minister of State for Disability Finian McGrath: ‘I want to get this moving. However, I also wish to ensure and put down a marker in order that the other people will not be excluded.’ Photograph: Gareth Chaney Collins

New terms of reference for the investigation into the abuse of the intellectually disabled woman “Grace’’ are expected to come before the Dáil on Thursday.

Responding to Opposition pressure to broaden the inquiry, Taoiseach Enda Kenny said on Wednesday that there would be further consultation, and that amended terms would be set out very explicitly and clearly for everybody.

“What we want here is phase one and phase two to take into account others who were in that foster home and other issues raised there,’’ Mr Kenny said.

He said the Minister of State for Health, Finian McGrath, had withdrawn the motion placed before the Dáil on Tuesday setting up the inquiry and outlining terms of reference. A revised motion would be put to the House on Thursday.

Fianna Fáil leader Micheál Martin welcomed the Government’s willingness to engage with the Dáil on the issue. The key issue, he said, was the inclusion of others in the inquiry. He said it stretched credibility to say it was just one person who was badly abused.

Others allegedly abused had come forward, he added.

Earlier, Mr McGrath said that everybody would be listened to. “That is how we will get to the truth and justice for ‘Grace’ and others. I also believe that we need decisive action and accountability.’’

The Minister said he had great confidence in the chairwoman of the commission, Marjorie Farrelly SC, who was fully satisfied with the terms of reference.

Mr McGrath said he wanted answers as quickly as possible in the case of “Grace’’, who was resident in the foster family for so many years. “I want to get this moving. However, I also wish to ensure and put down a marker in order that the other people will not be excluded.’’

Fine Gael TD John Deasy advised the Dáil to hold off “from accepting anything said by the Health Service Executive on this matter’’.

Mr Deasy said he and Fianna Fáil TD John McGuinness had discovered that, in dealing with the HSE on the issue, “the first casualty was always the truth’’.

The TD said there were examples to show “a cover-up’’ was involved.

He said the legal advice to the HSE from day one was to make “Grace’’ a ward of court to protect her, but it had refused to do so. He said that was because the HSE had concerns about a judge asking awkward questions about its failings in that regard.

According to Mr Deasy, at a HSE committee on vulnerable adults in June 2008, three options were discussed: do nothing, make Grace a ward of court, or give the birth mother information under a freedom of information request and risk her being made a ward of court as a result.

He said it was noted at the meeting that “this would lead to a disastrous day in court, as it would appear the HSE had done nothing’’.

“The HSE took the first option, did nothing and denied information to which the birth mother was entitled under FOI,’’ Mr Deasy said.

Mr McGuinness said the whistleblowers involved had first exhausted every avenue available to them in the HSE. “They tried everything to highlight this case but they were not listened to.”