Potatoes, carrots, parsnips, winter wheat and barley all under threat from heavy rain 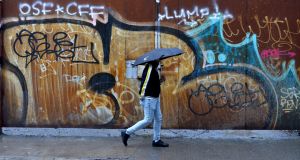 A weather warning has been issued for eastern counties until 9pm on Monday. Photograph: Alan Betson

The incessant wet weather is causing potatoes to rot in the ground and is preventing the planting of winter wheat and barley.

It has been an exceptionally wet autumn to date and a yellow rainfall warning for east coast counties was issued by Met Éireann on Monday which was in effect from 8am until 9pm Monday night.

Irish Farmers’ Association national potato chairman Thomas McKeown said a third of the potato harvest remains in the ground, when it would be expected that 95 per cent of it would be gathered by now.

Mr McKeown first warned two weeks ago that the potato crop was under threat. He said there was an improvement in the weather in the last two weeks, but the ground was still too wet for machinery to harvest all the crops.

He maintained the harvesting of the rest of the potato crop will depend on an improvement in the weather, though the forecast remains unsettled for the foreseeable future.

IFA horticulture executive Pat Farrell said in Wexford only about 25 per cent of winter crops such as barley and wheat have been planted to date because of the wet soil.

“The only ground that has been planted is the drier ground,” he said. “Dublin, Meath and Louth are something similar. There’s just 40 per cent of the winter crops planted there.”

Mr Farrell said the window for planting winter barley has now passed while that for winter wheat is closing rapidly.

“There has been almost 50mm of rain in the eastern region between Saturday and Monday on top of what we had before,” he said.

He warned it is now becoming very difficult to harvest root crops such as carrots and parsnips because of the condition of the ground.

Cabbages and Brussels sprouts are becoming “moisture stressed” and could end up rotting in the ground.

“Because of the amount of rain, the water table is very high. Soil is becoming waterlogged. After the weekend, people are getting very concerned about it.”

Met Éireann said up to 40mm of rain fell in Dublin over Sunday and Monday, which was the wettest part of the country “by far”. There was also significant rainfall in the greater Dublin area including Wicklow and Louth. However, for forecaster said the rest of the country saw lower levels.

Temperatures have been about or just above normal, but are likely to take a dip towards the end of the week.

Further rain is due on Wednesday and Thursday with hail on Thursday as the temperatures drop. This could lead to frost at night.

A fluctuation in the jet stream means the country has experienced wet weather since August.

October was an exceptionally wet month in the south of the country. Roche’s Point in Cork experienced 191.2 mm of rain in October, almost twice the monthly average while Valentia Observatory in Co Kerry had its wettest October since 2009.

At Moore Park in Co Cork on October 14th, 56.2mm of rain fell, half the monthly average in a day.

The outlook up to the start of next week is for unsettled conditions to continue.