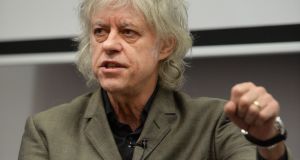 Bob Geldof railed, as only he can, against political populism and the inability of the European Union to function effectively, when he met a group of Trinity College students on Thursday in Dublin and discussed the problems of the world.

“If Britain is the loose thread on the EU cardigan and the whole thing unravels, which is what seems to be happening, and every state starts competing, they go to war,” he said.

He feared a “thuggish predatory Russia” was “already invading Europe”. He said he accepted the result of the Brexit referendum but “just as it is my democratic duty to accept the result, it is my duty to argue against it”.

He urged his audience – about 100 members of the Trinity College Dublin Law Society – to become political activists, and not on social issues. The reality for many was that they “hadn’t had a pay rise for eight years and you are banging on about transgender toilets”, he told the students.

“Europe desperately needs reform; it is sclerotic, constipated, it needs some laxative to clear it out,” he said. “You guys are inheriting a deeply significant moment. My generation has failed more spectacularly than most – you have Brexit, Trump, the referendum in Italy, le Pen in France . . .”

Geldof was in the university to receive the Praeses Elit Award from the Law Society – a gold-coloured medal in a case; “a proper award,” he said smiling and thanking the society.

Hilary Hogan, auditor of the society, cited Geldof’s “incredible music career”. This, “coupled with his extraordinary activism on behalf of some of the most impoverished and downtrodden members of society” made him a worth recipient, she said.

Looking his characteristic louche self and wearing a light grey two-piece suit, Geldof entertained and challenged with fast talk, frequently peppered blue, but his message was far from flippant. In his view, Europe was headed for war – it might take a generation but that was where populism, plutocracy and the siren appeal of seemingly simple solutions would lead.

He admired the passion of Ukip former leader and Brexit frontman Nigel Farage, even if he hated the country into which he was turning Britain, a country he said had rescued him from the stifling Ireland of the 1960s and 1970s and allowed him breath.

He blamed much of what he now found disturbing across the developed world on the advent of the smart phone.

But whereas the 15th century invention of the printing press had stimulated democracy by spreading ideas and promoting literature and dialogue, the smart phone – “six million times Gutenberg,” he said – turned people into individual “silos of isolated conviction”.

The result was a president-elect of the US behaving like “some t**t, tweeting 140 characters of foreign policy”.

“Venting your spleen on your phone is just cyber-wanking,” he said.

Young people need to get out and talk, argue, persuade, get involved and stop populism with debate and a better vision for the world.

“I can’t stand the lack of radicalism, the lack of fresh thought in colleges. . . I don’t understand it,” he told his audience.

Silvio Berlusconi – “that creep” – was going to be calling the shots soon again in Italy. “If you let Hollande and these others determine Europe for you, you’re nuts, you’re nuts!”

And with that, it was selfie time . . . and off to the Convention Centre, for another award.