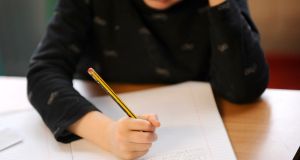 New school admissions legislation will do nothing to change the ‘Catholic first’ enrolment policies of the vast majority of schools, an Oireachtas committee has heard. File photograph: Dominic Lipinski/PA Wire

New school admissions legislation will do nothing to change the “Catholic first” enrolment policies of the vast majority of schools, an Oireachtas committee has heard.

Minister for Education Richard Bruton is planning to introduce new laws ahead of the next academic year in order to bring greater fairness and transparency to school admission policies.

However, patron bodies and campaign groups told an Oireachtas education committee on Thursday that the school admissions Bill will not change the “baptism barrier” which allows oversubscribed denominational schools to discriminate against children on the basis of their religion.

Educate Together said the legislation failed to address the “injustice” faced by many families attempting to enrol their children in schools across Ireland.

Paul Rowe, the organisation’s chief executive, said this was due to an education system in which more than 96 per cent of schools were religious-run and “Catholic first” enrolment policies were effectively sanctioned under the Equal Status Act.

The Act allows denominational schools the right to discriminate against children on the basis of their religion.

Mr Rowe said: “In our experience, this remains the most serious issue concerning school admissions facing a rising number of families in Ireland.”

He said there were still large areas of the country where parents have no alternative but to send their children to denominational schools.

However, the proposed legislation did nothing to address this.

Mr Rowe said: “What would truly serve the common good is a national network of equality-based schools that welcome and cherish all children.”

The Education and Training Boards Ireland, the patron body for almost 300 secondary and primary schools, also said it was seriously concerned that students may still be refused access to their local school for religious reasons.

Pat O’Mahony, the organisation’s education policy officer, said the days when the State’s population was predominantly Roman Catholic and when religious observance was an integral part of daily life were “gone forever - whether we like it or not”.

While the Minister for Education has indicated that about 20 per cent of schools are oversubscribed, the Catholic Primary Schools Management Association said the figure was misleading.

The association said oversubscription was only an issue in between 3 and 6 per cent of its primary schools, based on a recent survey of diocesan education secretaries.

It said that any oversubscription is confined to a relatively small number of schools in the greater Dublin area.

“The vast majority of Catholic primary schools take everyone who applies,” the association said, in a written submission to the committee.

Speaking before the committee, several groups - including the Education Equality campaign group - called for the immediate repeal of the Equal Status Act to ensure all children have an equal opportunity to attend their local school, regardless of religion.

Paddy Monahan, the group’s spokesman, said: “In short, it is profoundly wrong that four- and five-year-old children should face State-imposed discrimination and segregation on the basis of religion.” Equate Ireland, a campaign group, said the perception that it was impossible to amend the Act was misplaced.

Dr Eoin Daly, of NUI Galway, and a member of Equate, said the Oireachtas has the power to require all publicly-funded schools to accept all children of all religions and none on an equal basis.

In a joint presentation, Atheist Ireland, along with the Evangelical Alliance Ireland and the Ahmadiyya Muslim Community of Ireland, said discrimination on the basis of religion should be made a human rights issue.

“The State is not balancing competing rights. It is simply ignoring our guaranteed rights to equal access to a local school, and far more importantly, to have the State curriculum delivered in an objective, critical and pluralistic manner,” the alliance’s spokeswoman, Jane Donnelly, said.

Separately, Gaeloideachas, the representative body for more than 300 Irish language schools, said its schools should be allowed to prioritise native Irish speakers in their school admission policies.

Bláthnaid Ní Ghréacháin, the group’s chief executive, said: “It is imperative that schools maintain the basic right to protect and maintain the language of instruction and communication of the school and its community so that the future of both the Irish language and of the immersion education model in Ireland is sustainable.”