Chinese media urge use of force in Taiwan after Trump call 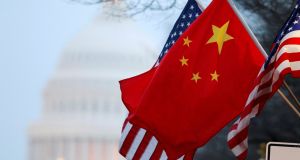 The People’s Republic of China flag and the US Stars and Stripes fly on Pennsylvania Avenue in Washington during a visit by then Chinese president Hu Jintao in 2011. Photograph: Hyungwon Kang/Reuters

After criticism by US president-elect Donald Trump of China’s policy towards self-ruled Taiwan, Chinese media have called for a harder approach to its neighbouring rival, saying Beijing should consider how to “punish them militarily”.

While Mr Trump has yet to take over as president, there are strong flags that his administration will be tough on China. He has hinted at a more pro-Taiwan line in Asia and Beijing was angered by a phone call between Mr Trump and the island’s ruler Tsai Ing-wen last week.

“It might be time for the Chinese mainland to reformulate its Taiwan policy, make the use of force as a main option and carefully prepare for it,” said a commentary in the state-owned Global Times newspaper, which often reflects government thinking.

Among the measures mooted is the Anti-Secession Law, which was passed by China’s annual parliament, the National People’s Congress, more than a decade ago and outlines the use of force to bring the renegade province of Taiwan back into the fold.

“Once Taiwan independence forces violate the Anti-Secession Law, the Chinese mainland can in no time punish them militarily,” the newspaper said. “Moreover, getting ready to achieve reunification through the use of force can pose a serious deterrence to Taiwan independence.”

Mr Trump has said he thinks the “One China Policy”, where the US agrees not to recognise Taiwan as a country, but still maintains unofficial relations and has agreed to support Taiwan should China ever invade, should perhaps be made contingent on trade.

The editorial went on to attack Ms Tsai’s Democratic Progressive Party (DPP), saying it and Washington must not be allowed to shape the future of Taiwan.

“It is hoped that peace in the Taiwan Straits won’t be disrupted. But the Chinese mainland should display its resolution to recover Taiwan by force. Peace does not belong to cowards,” it said.

The government has formally responded in a muted way to the rhetoric from Washington.

However, China’s ambassador to the US, Cui Tiankai, said: “Basic norms of international relations should be observed, not ignored, certainly not be seen as something you can trade off . . . And indeed, national sovereignty and territorial integrity are not bargaining chips. Absolutely not. I hope everybody would understand that.”

Calls for a less passive approach on Taiwan have been accompanied by China stepping up its militarisation of several reefs in the South China Sea, most of which Beijing claims as its own.

Mr Trump has criticised China’s ambitions in the South China Sea, where it has territorial disputes with neighbours Brunei, Malaysia, the Philippines, Vietnam and, of course, Taiwan. In July, an international maritime tribunal in The Hague rejected China’s claims.

This week, satellite footage from the US think tank the Asia Maritime Transparency Initiative appeared to show installed anti-aircraft guns and other weapons on all seven of the artificial islands it has built in the Spratly Islands.

The construction of military facilities on Fiery Cross, Mischief Reef and Subi Reef, despite Chinese claims that they would not build military structures there, has sparked fears that China will use its growing military might to enforce its territorial claims and take control of one of the world’s busiest shipping routes.