Bishops warn against ‘abortion on demand’ 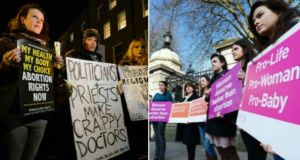 ‘The law and the teaching of the Church have always found a way, with compassion, to deal with the hard cases’

The issue facing voters on May 25th is whether they want to remove protection for the unborn child from the constitution, paving the way for unrestricted abortion, Bishop of Ossory Dr Dermot Farrell, has warned.

Bishop Farrell said the result of an abortion is always the death of an unborn girl or boy and repealing the Eighth Amendment will allow for abortion on demand for up to 12 weeks but that did not believe that that was what the Irish people wanted.

“The real issue is not the difficult and stressful pregnancies so often cited in debate but whether we want to strip the unborn defenceless child forever of the right to life. The law and the teaching of the Church have always found a way, with compassion, to deal with the hard cases,” he said.

In a pastoral letter read out at masses in all 42 parishes of the Diocese of Ossory which consists of Co Kilkenny and parts of counties Laois and Offaly, Bishop Farrell warned that once introduced, abortion is extremely difficult to restrict.

“Laws do not remain static. Moreover, abortion becomes normalised. For example, in England about 40 per cent are repeat abortions. What was once proposed as a resolution to a tragedy has, over time, become a matter of lifestyle and choice,” he said.

Bishop Farrell’s warning was echoed by the bishop of Waterford and Lismore, Dr Alphonsus Cullinan, who said Ireland’s modern technological culture is becoming more and more individualistic and “desensitized to the rights of the very old, the disabled and the baby in the womb”.

In a pastoral letter read out at all masses in all 45 parishes of the diocese, Bishop Cullinan urged parishioners to look at England and Wales where one in five pregnancies are aborted and where over 185,00 abortions were performed in 2016

“If the Eighth Amendment is repealed abortion legislation will follow and, within a few short years, we can expect Ireland’s abortion rate to rise rapidly as it has in Britain and many other European countries. We will have abortion on demand. Let us not make the same mistake here.”

Bishop John Kirby of Clonfert said the Eighth Amendment was not an impediment to saving the life of a mother as Irish doctors have always had to deal with situations where their intervention to save the mother’s life has resulted in the unavoidable death of the baby in the womb.

“This intervention by health care staff has always been done responsibly and safely, acknowledging the right to life of the unborn and with due regard to the equal right to life of the mother. As a society we must continue to have regard for both lives,” Bishop Kirby said.

In a pastoral letter read out at masses in all 24 parishes of he Diocese of Clonfert - which includes portions of counties Galway, Roscommon and Offaly - Bishop Kirby suggested adoption was a more compassionate and positive response than abortion for those experiencing unexpected pregnancies.

“The promotion and development of adoption would be a support to many women unexpectedly pregnant. It would also be a great boon for many Irish childless couples,” he said, noting only five babies were presented for adoption in Ireland in 2016.

Meanwhile Bishop Ray Browne of Kerry warned in a pastoral letter read out at masses at all 53 parishes in the diocese that repealing the Eighth Amendment would leave Ireland exposed to the sort of liberal abortion regime that exists in the United Kingdom before he praised anti-abotion campaigners.

“I commend the work of Pro Life groups seeking to protect the right to life of the unborn child. Please give these groups what support you can. They seek to be the voice of the voiceless, a voice for unborn children,” he said.