Lithuanian, Latvian and Estonian culture and heritage is showcased in Dublin 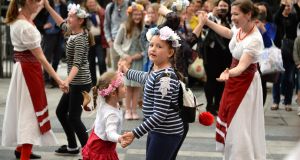 Officially, there are nearly 60,000 people from the Baltic states of Lithuania, Latvia and Estonia living in Ireland.

Unofficially, that figure is closer to 110,000, according to their respective ambassadors, who attended the annual Baltic Day celebrations in a sun-kissed Temple Bar on bank holiday Monday.

Members of the Baltic diaspora are now a substantial part of the Irish population from a standing start just 14 years ago when they joined the EU.

They are also a substantial absence in their own countries. In Lithuania and Latvia, everybody knows somebody who lives in Ireland

Monday’s event was the third Baltic Day get-together in Ireland. This one had a special centenary theme, as all three countries declared independence in 1918. In the case of Lithuania, which was one of the biggest states in Europe during the Middle Ages, it was a reaffirmation of independence.

The experience of the three states is a reminder that the State was not the only small country which used the first World War as a pretext to assert its desire for freedom.

The three Baltic states were brutally occupied by the Soviets from 1940 and they were only able to reassert their independence in 1991.

“The message is that countries like ours are small nations who were occupied by big powers many times, but we have always striven for freedom and independence,” said the Lithuanian ambassador, Egidijus Meilunas.

He estimates that there are 80,000 Lithuanians living in Ireland, spread across every county.

There are also an estimated 30,000 Latvians in Ireland, while the Estonian population is by far the smallest, with just 2,500 resident here.

Estonian ambassador Kristi Karelsohn explained that that relatively small number was the direct result of Estonia’s proximity to Finland, with which it shares linguistic and historical ties.

As a consequence, its emigrants choose to go there rather than to the Republic or the UK.

Each of the three countries took a stand in Temple Bar and showcased their country’s musical and dance heritage.

“People try to see us as one group. With events like this we also want to show that we are different,” said Ms Karelsohn.

“We have one cultural thing that is common to all three countries. We all have a tradition of huge song and dance festivals,” she said.

“Every five years in each country we have a huge celebration where the national dancers and the choirs come together and sing together. There are tens of thousands at these events.”