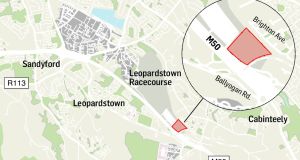 Land in Leopardstown, south Co Dublin, which has become the State’s most valuable “vacant site”, could be used to build 1,000 social and affordable housing units, local county councillors have said.

The site has been valued by the council on its Vacant Sites Register at €66.5 million, making it the most expensive plot of land published on any of the local authority registers established to combat the hoarding of land that could be used for housing.

Dún Laoghaire-Rathdown County Council has written to the Minister for Housing Eoghan Murphy seeking that the land, owned by Horse Racing Ireland (HRI), be used for “public and affordable housing”.

Since January, local authorities have had the power to impose a levy on property owners who fail to develop prime housing land. The levy, set at 3 per cent of the value of the land for 2018 and 7 per cent for subsequent years, will be charged on vacant sites from this year but is not payable until 2019.

The council wants about 6.5 hectares of the larger site to be used for the construction of housing for people on the social housing waiting list, and lower-income workers.

“State bodies such as Horse Racing Ireland can’t be allowed to sit on disused sites as if they were nest-eggs while working tenants and homebuyers are being priced out of Dublin. I would like to see this land and similar sites developed for a combination of social and affordable housing,” said Ossian Smyth, Green Party housing spokesman and Dun Laoghaire councillor.

“Eoghan Murphy had previously assured the council, in person, that he would supply whatever finance was need to build on suitable sites. This site even has its own Luas stop and could provide housing for 1,000 families.”

HRI is appealing the inclusion of both sites on the register and said it is considering plans to build housing, a hotel and possibly a school on part of the land.

A spokesman for Mr Murphy said the use of the land was a matter for HRI.

The second most valuable vacant site in the State is also on the Dún Laoghaire register, a €22.5 million site owned by the Central Bank, next to the mint in Sandyford.