Bill would put Parole Board on a statutory basis, independent of Minister for Justice 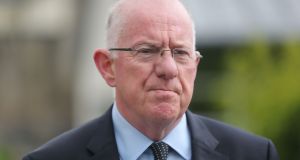 Charlie Flanagan: the Minister for Justice is bringing forward a number of committee-stage amendments to the Bill, which Fianna Fáil will support. Photograph: Niall Carson/PA Wire

Free legal aid is to be provided for victims of crime as well as those who were convicted but seeking parole, under proposals being brought to Cabinet on Tuesday.

The move by Minister for Justice Charlie Flanagan is in response to a Private Members’ Bill from Fianna Fáil justice spokesman Jim O’Callaghan, whose Parole Bill 2016 has passed through committee stage in the Oireachtas.

The Bill would put the Parole Board on a statutory basis, independent of the Minister for Justice.

Mr Flanagan is bringing forward a number of committee-stage amendments to the Bill, which Mr O’Callaghan and Fianna Fáil will support.

Mr Flanagan will seek Cabinet backing for the amendments at its weekly meeting today.

In publishing the Bill two years ago, Mr O’Callaghan said it was inappropriate that a politician should have the ultimate say on whether a prisoner should be granted parole.

“Prisoners who seek parole and citizens are entitled to know the basis on which it is being granted,” he added.

Responsibility for granting parole would be transferred to the board from the Minister for Justice. Mr O’Callaghan said it was important to have in place an independent, transparent and statutory-based scheme that set out how and when a person was granted parole.

Mr Flanagan has said the Bill “provides for establishing a Parole Board on a statutory basis to determine releases from prison of long sentence offenders.

“The Bill sets out the criteria to be considered in deciding on the release of prisoners, which include risk to public safety and the extent to which release will facilitate the prisoner’s reintegration into society.”