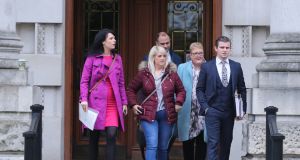 Belfast’s High Court ruled on Thursday that abortion laws there are incompatible with the UK’s human rights commitments. Above, Sarah Ewart (front centre) leaves the court after her case was upheld. Photograph: Niall Carson/PA

The representative body of Irish Catholic Bishops has called for the restoration of the devolved administration in Stormont in an effort to block the liberalisation of abortion laws in Northern Ireland.

Following the agm of the Irish Catholic Bishops’ Conference, which was held in Maynooth this week, the group issued a statement calling on “the Westminster parliament to recognise and respect the right of the Northern Ireland Assembly and the citizens who voted for it, to have the primary role in legislating in this area”.

The group also called on Northern Ireland’s politicians “to do all in their power, including restoring the assembly, to prevent the imposition of this legislation, so that the primary value of every human life would be protected and that a voice be given to those who to date have had no voice in this debate”.

Laws passed in Westminster in July will decriminalise abortion in the North unless devolved government in Stormont is restored by October 21st. In a further blow to pro-life campaigners in the North, Belfast’s High Court ruled on Thursday that abortion laws there are incompatible with the UK’s human rights commitments.

The court found that laws in Northern Ireland breached the European Convention on Human Rights as it is illegal to obtain an abortion in the case of a fatal fetal abnormality. The legal challenge was brought by Sarah Ewart, who in 2013 travelled to England for a termination after a scan showed her unborn baby had a foetal abnormality and would not survive outside the womb.

The child’s brain was not developed properly and she would have died during pregnancy or soon after birth, doctors had determined.

Ms Ewart had fought a six-year legal battle following the refusal of her request for a termination. After Thursday’s judgment, she said the ruling “is a turning point for women in their campaign against the outdated laws prohibiting abortion in Northern Ireland.

“It should never have come to this. Today’s ruling is a vindication of all those women who have fought tirelessly to ensure that we never again have to go through what I did in 2013,” she said. Mrs Justice Siobhan Keegan said her testimoney had been compelling