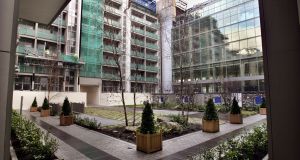 A number of celebrities, including actors and nightclub owners, have been drawn into a legal case against firms involved in the construction of a boom-time Dublin apartment block.

The case, which was lodged against firms involved in the construction and design of the Spencer Dock Apartments in Dublin’s docklands, has been taken in the name of the owners of many of the apartments.

Spencer Dock has been affected by building defects, including water ingress around window frames, while issues regarding balconies, leaks and fire alarms at the development have also been reported.

The owners, who purchased the apartments for peak prices at the top of the boom, include actor Colin Farrell, who is understood to own six apartments in the development, and television presenter Glenda Gilson.

Robbie Fox, the former owner of Renards Night Club, a Celtic Tiger fixture, is also listed as a plaintiff, as is his wife, Martina.

Prominent figures in the Celtic Tiger property scene, many of whom were involved with developer Treasury Holdings, are also named as plaintiffs, including John Bruder and Mark Pollard. Also listed are members of developer Johnny Ronan’s family, including his brother Conor and Conor’s wife, Claire. Mr Ronan was a director of Treasury Holdings.

Spencer Dock was constructed as a landmark development, with some apartments boasting their own pools. When the apartment scheme was launched in 2002, people queued in the rain on the first day viewings were available.

Up to €150 million was spent acquiring units in the development in the days after they came to market, it was reported at the time. Even in recent years, duplex apartments at the scheme sold for €900,000-€1.45 million.

Well-placed sources said the action, while taken in the name of the property owners, had been initiated by the firm that provided insurance warranties to those purchasing units. The company, Premier Guarantee, has previously taken out similar actions in Ireland on behalf of homeowners who have experienced difficulties with pyrite.

The defendants include a subsidiary company of construction giant Sisk, which was responsible for the overall project, as well as a dozen other engineering and design firms.

Among the firms listed as defendants is architect firm Scott Tallon Walker, which designed the scheme. The firm’s managing director is also listed as a plaintiff, but sources suggested this was probably due to him being an apartment owner at the scheme.

A property fund linked to Davy stockbrokers is also listed as a plaintiff.

Three directors of the owner’s management company, a corporate entity composed of apartment owners in a block and responsible for maintenance and upkeep, are also listed.

A spokesman for Sisk had no comment when contacted. The management agent for the apartment development did not return a request for comment, while efforts to contact Scott Tallon Walker were unsuccessful.

While apartments in the scheme are still in demand, and can rent for upwards of €4,500 a month, it has been affected by a series of alleged building defects. Most recently, an agent acting on behalf of receivers now responsible for some apartments in the development wrote to tenants in relation to “potential defects in the window frames of the apartments”.

It is understood that water ingress has been detected around the frames of the windows.

Sources said the action was probably being taken to aid Premier Guarantee in recouping any charges it had already been hit with, or may be hit with in the future. Purchasers would have, along with their apartment, bought a warranty from Premier Guarantee at the time of purchase.

Premier Guarantee did not reply to a request for comment.