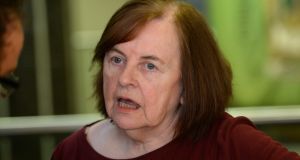 There will be a “whitening” of immigration into the UK as a result of the country’s points-based application system, the activist and campaigner Bernadette McAliskey has warned.

“The poorer southern hemisphere economies [will] support a smaller percentage of individuals meeting the various thresholds than the European countries with which they are now competing,” she told The Irish Times.

She also said the new measures could also encourage EU nationals and firms to leave Northern Ireland and move across the Border to the Republic.

“The economy of Northern Ireland cannot survive without immigrant labour, and this points system will make it extremely difficult.

“So where will industry go? The problem for us in the North, sitting here in this town [Dungannon, Co Tyrone], is that if you want to have freedom of movement and be able to do your job you might as well move back to the European Union. You don’t have far to go.

“To be able to keep a pool of labour that is legally recruited,” she said, “why would industry not follow you?”

The UK government announced on Wednesday that a points-based immigration system which will apply to both EU and non-EU citizens will come into force from January 1st, 2021.

EU, EEA and Swiss citizens living in the UK from before December 30th, 2020, must apply to the UK’s EU Settlement Scheme (EUSS) to continue to remain after June 30th, 2021.

Under Common Travel Area rules, Irish citizens will continue to be able to live and work in the UK as they do now.

From January, applicants who wish to come to the UK must be skilled workers who meet sufficient criteria to gain 70 points on the new system.

To do so, they must speak English and have a job offer from an “approved employer” at an “appropriate skill level”. They must also meet a salary threshold of £25,600 (€30,300), hold a PhD in a particular area, or have an offer of a job in areas where there are shortages.

This has been criticised by politicians and business leaders in Northern Ireland, who say the new rules do not reflect lower salaries in the North and argue it will cause shortages of staff, particularly in sectors such as agri-food.

Ms McAliskey is chief executive of the South Tyrone Empowerment Programme (Step), a community development organisation that works with migrants in the Dungannon area.

She warned that any EU nationals currently who are already in the country must register for settled status by December 31st, 2020, or they would become subject to the new rules.

Anyone who does not apply, she said, would “automatically become a non-documented migrant and subject to these new immigration regulations”.

“When the politicians say ‘Oh, any EU citizen already here is okay’, that’s not true,” Ms McAliskey said. “If people look at the documentation, [it says] there will be no change to the rights and status of an EU citizen currently living in the UK who has applied to the EU settlement scheme.

“If you haven’t applied,” she said, “the politicians leave that bit off, because they don’t really care if you apply or not.”

Since last May, she said, Step has supported almost 20,000 EU citizens to complete their applications for settled status, with a focus on “the most vulnerable who are not able to register easily.

“There are, however, a significant number of EU citizens who could independently complete the online registration application, which is English-only, and should do so for their own protection.”

The new system, she warned, “will be Windrush down the line”, referring to the scandal over the treatment of so-called Windrush generation, mostly children of those who arrived in Britain from the Caribbean in 1948 and who were given permission to stay in the country but had no documentation to prove it in 2018 when some of them were incorrectly told they were living in Britain illegally.

“What happens around young people, totally unaware of their undocumented status until they go to get a national insurance card and discover they aren’t actually equal to everybody else, even though this is the only place they have been?”

Brexit, she said, “was always about reducing the number of immigrants” and this was the “expected outworking of it”.

“A right-wing government that wants to reduce immigration will introduce an immigration system that makes it increasingly difficult for people to come and live and work here.”

It would not, however, reduce immigration. “It simply will push people who are desperate to emigrate from wherever they are to more desperate measures to get into the UK, so it increases the risks that people will take.

“It will increase the refugee asylum-seeking population by simply narrowing the economic opportunity to emigrate.”