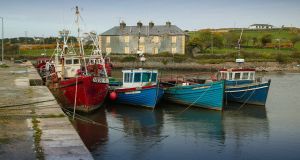 Belmullet in Co Mayo, which has seen an increase in the number of tourists since it was included on the Wild Atlantic Way, wants to become Ireland’s “next Dingle”, according to local campaigners.

Offaly man David Tyrrell, who has lived in Belmullet for a decade and manages the 90-room Broadhaven Bay Hotel, believes the Mayo town on the Erris peninsula has enormous untapped tourist potential.

“I remember when the Erris region was awarded the Best Place to go Wild [2014]by the Irish Times – Belmullet was a town that wasn’t ever really known or mentioned before,” he said.

“This recognition had an immediate impact on the tourist machine here, because we got huge press out of it and that opened doors in Ireland and internationally,” he said.

Praising the town’s prospects, Pádraig Conroy, who runs McDonnell’s pub on Barrack Street, believes local roads must be improved if Belmullet is to reach its potential.

The road between Castlebar and Belmullet is inadequate, he said.

“Even after 30 years I have to totally concentrate driving it and would nearly avoid it, it is so bad.” By contrast, he said, the road from Mulranny to Belmullet is “like a motorway”.

Irish language road signs are a problem, and should be bilingual, said Mr Conroy. “Beal Átha an Muirthead is of no benefit to a German or Italian looking to find Belmullet. I’m a native Irish speaker, it is nearly my first language, but I still want to see the signs that say Belmullet in English.”

“It delayed the timing of the D-Day Normandy landings by a day, saving thousands of lives, thanks to a fog-warning alert. It deserves its very own peace park because it changed the course of European history,” he said.