‘It was ... startling to feel the level of public support,’ says Mr Justice John MacMenamin 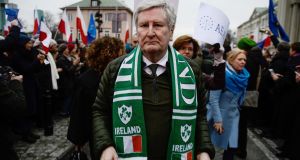 An Irish Supreme Court judge has described a demonstration of dozens European judges in Warsaw in defence of their Polish colleagues as a “humbling” experience.

An estimated 30,000 people took to the streets of Warsaw on Saturday in a silent march against reforms of the judicial system many fear undermine independence of judges and the rule of law in Poland.

Many thousands more lined the route, chanting “thank you!” as the judges passed, many in their official robes.

Marching in his civilian clothes, Mr Justice John MacMenamin acknowledged that his presence in Warsaw – representing the Association of Judges of Ireland (AJI) and bringing a message of support from the Chief Justice Frank Clarke – was unprecedented on several levels.

“It was a very humbling experience, and startling to feel the level of public support,” said Mr Justice MacMenamin. “It was fairly unprecedented to have a procession of judges just saying, ‘let judges do their job fairly and objectively’.”

He said the AJI had “thought deeply” before deciding to participate in the Warsaw march and said it was a “misapprehension” that attending meant the Irish judiciary had crossed a political line.

“We are operating in the normal area of judges,” he said.

The march was the latest twist in a four-year battle for control of Polish courts sparked by a programme of reforms by the ruling national conservative Law and Justice (PIS) party.

Critics argue the reforms, which the PIS says are overdue and designed to tackle cronyism among other issues, are an ill-disguised attempt to intimidate judges and politicise the courts.

The reforms over how, and by whom, judges are appointed have brought Warsaw into conflict with Brussels. Opponents say a new body to discipline judges has spread fear in the judicial system that undermines court independence.

On Tuesday, according to weekend reports, the commission will ask the European Court to suspend operation of the disciplinary chamber.

At a pre-march gathering, judges from the Netherlands to Romania all echoed the same message: an attack on Polish judges is an attack on the rule of law across Europe.

Welcoming the judges was Prof Malgorzata Gersdorf, first president of the Polish supreme court, who has waged war against the government reforms and defied its attempts to forcibly retire her and other colleagues critical of the measures.

She said she had spent her professional life believing that “judges should speak through their rulings”.

“But this is an extraordinary situation,” she said. “The executive in Poland is taking all the power from judges and is destroying the rule of law. But judges are sworn to uphold the rule of law, they have a duty to defend it.”

Polish judges marching on Saturday said the presence of their European colleagues was good for morale – but most doubted it would influence the PiS party.

The Polish government largely ignored the march, though deputy justice minister Marcin Warchol tweeted it “endangers the independence of the courts and the judges”.

Wiktor, a 23 year-old Polish student watching the march, said it was “no mystery that these court reforms are a power grab by the government”.

“It’s heartening to know there is European support for our struggle,” he said.

For European judges the Polish stand-off is of pan-European significance because any doubts about the independence of courts here could undermine mutual trust in the EU judicial system as a whole mean see cross-border legal business EU grinds to a halt.

As one judge murmured to another as the march got under way: “In terms of systemic risk, this is as big as the euro crisis.”