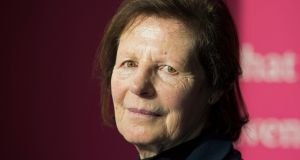 Norah Glynn, a great-niece of Owen McMahon: ‘I was in my late teens when I heard about it.’ Photograph: Dave Meehan

The most infamous incident of the Belfast pogroms was the massacre of the McMahon family on March 24th, 1922.

Owen McMahon, a prosperous pub owner from north Belfast, his sons Bernard, Frank, Patrick and Gerard and a barman Edward McKinney were shot dead in an incident which caused international outrage and forced the intervention of the British prime minister David Lloyd-George.

Gunmen broke down the door of the McMahon family home in Kinnaird Terrace with sledgehammers and told the male occupants to “say their prayers” before they were sprayed with gunfire.

The perpetrators of the massacre were never found, but they were named in a Free State government report as 12 RIC policemen led by Detective Inspector John Dixon, a unionist from Co Cavan.

The McMahon family would appear to have been targeted for no reason other than that they were a prominent Catholic family in Belfast. Owen McMahon was a supporter of the constitutional nationalist Joe Devlin.

The killings prompted Lloyd-George to summon both Michael Collins and the Northern Ireland premier Sir James Craig to London which led to the short-lived Collins-Craig pact which was an attempt to stop the violence in the North.

The McMahon massacre cast a dark shadow over the family for generations afterwards. One son, John, survived by playing dead. He left Belfast a short time afterwards and lived out his life in London.

Norah Glynn, who lives in Foxrock, is a great-niece of Owen McMahon. “My mother was 11 years old when this terrible tragedy happened and they had to leave Belfast for two years to live as her father owned a public house in Belfast,” she says.

“He was so worried that they would also be attacked. My mother never spoke about it and I was in my late teens when I heard about it. She would always say to us growing up, ‘Treat everyone else the way you would like to be treated and leave the world a better place’.”