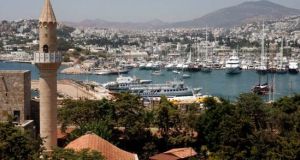 A view of the city of Bodrum, its bay and its harbour. The city is a popular destination with tourists. Photograph: Getty

Locals in north Belfast were said to be in shock at the death of a local man and the hospitalisation of two friends on holiday in Turkey after they fell ill.

One of the three friends died on Saturday, while the other two are in critical care in hospital. They were on holiday in the resort city of Bodrum.

The three men are thought to be in their late 20s or early 30s.

Two of the men were travelling on Irish passports, while the third was using a British passport.

John Finucane, MP for Belfast North, said he knew one of the men personally and that it was an “absolutely heartbreaking” tragedy affecting “three fit and healthy young lads.”

Mr Finucane said that members of one of the families were flying from Liverpool to Turkey to be with their relative, while arrangements were being made for the return of the deceased man.

“It has really impacted on the community. You get a sense of that from social media. Everyone’s thoughts are just with the families at this stage,” he said.

A spokesman for the Department of Foreign Affairs said: “We are aware of the case and are providing consular assistance.”

Mr Finucane said that he had spoken to department officials in Dublin and Turkey and that they are “providing all the consular assistance one would expect.” “It is just a tragedy now that there is a family going to have to make plans to bring their son home to bury him,” he said.

“It is just a very common set of circumstances. It is just absolutely heartbreaking and whilst it is a tragedy for one family, we are hoping that the other two lads will pull through.”