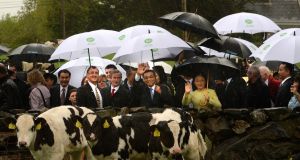 What is this controversy about?

One of the great coups for the Irish beef industry last year was the reopening of the Chinese market.

Irish exporters had been frozen out of the fastest-growing market in the world since the late 1990s because of the BSE crisis.

The deal is now in jeopardy because of a vote by Ireland at the United Nations Human Rights Council (UNHRC).

Ireland supported a motion by the United States criticising China over its human rights record, a move that has angered Beijing.

In the wake of the vote, Chinese officials contacted the Department of Agriculture warning that Ireland’s stance may have consequences for the beef deal.

While Beijing signalled an end to the 16-year-long embargo, trading has not yet commenced. There’s a mountain of bureaucracy to traverse before the first consignment can be shipped.

Minister for Agriculture Simon Coveney had hoped to head up a trade mission to China at the end of last year to formally open the market but slow progress in agreeing terms forced him to defer.

Industry sources suggest this may have been linked to the unexpected case of BSE detected in a Co Louth cow in May, which prevented Ireland gaining a negligible-risk status for the disease.

The department insists it is working closely with Chinese authorities “to finalise the remaining technical steps to allow trade of Irish beef to China to commence”.

How big is the Chinese beef market?

The emergence of a prosperous middle class in China has generated an increased demand for western-style diets, of which beef is a central component.

To put this in context, a 1.2kg increase for every one of China’s 1.4 billion population translates into an extra 1.68 million tonnes of beef demand for the Chinese market.

In volume terms, this equates to about three times our total beef exports.

Needless to say, even a small slice of the action could be very lucrative.

ABP was first to secure a contract to export Irish beef to the US after the opening of the market there last year.

Is the industry here worried?

To a point, but as most of our beef exports flow to Europe, China is not a top priority.

Britain, our largest trading partner, for example, takes 54 per cent of all Irish beef exports, equating to 272,000 tonnes, worth €1.1 billion.

The prospect of Britain leaving the EU is a major concern.

A more imminent threat is the possibility of changes to the European market as a result of various bilateral trade agreements between the EU and other trading blocs.

The Irish Farmers’ Association is considerably exercised by the prospect of a new deal with Mercosur countries, effectively South America, which could flood the European market with cheap beef, dragging prices lower and eating into Ireland’s market share.

What’s likely to happen next?

At best, the process of opening up China to Irish beef could be delayed as Irish authorities attempt to smooth ruffled Chinese feathers and restore good relations.

At worst, it could be scuppered entirely, leaving exporters out in the cold once more.

It’s hard to predict if Chinese actions represent a shot across Irish bows or a signal of something more punitive.