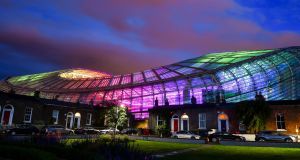 The Aviva Stadium is being lit up with the colours of Pride until June 8th as part of an effort to help young people who may be struggling to come to terms with their sexual identity. Photograph: David Fitzgerald/Sportsfile.

The home of Irish rugby and soccer will be bathed in the rainbow colours of Pride this week to act as a “beacon” for young people who may be struggling to come to terms with their sexual identity.

The Aviva Stadium is being lit up like a rainbow until June 8th as part of an initiative that originated among staff in the Aviva insurance company, which will also be illuminating its office on Dublin’s Hatch Street in a similar fashion.

Moninne Griffith, executive director of Belong To, which supports young LGBTI+ people, said the illuminated stadium could serve as “a symbolic beacon” and would send a message to young people that it is okay to be who they are and that they are “safe”.

Tommy Bowe, a former Irish rugby player and Aviva ambassador, said it was important to “promote diversity and inclusion”and to encourage a culture of openness.

He accepted that rugby has traditionally been viewed as a “macho” sport but denied that it was homophobic. He said the game was changing at all levels and becoming more inclusive.

Katie McCabe, captain of the Irish women’s soccer team, attended the event with her team mate and partner Ruesha Littlejohn.

“Seeing the Aviva Stadium, our national arena for rugby and soccer lighting up the Dublin skyline in rainbow colours is truly amazing,” she said, adding that she hoped the move would help “men, women, boys and girls” to realise they belong to a bigger community and are not alone.

Shaun McDonald of Aviva said this year was the 50th anniversary of the Stonewall riots in New York, which saw members of the gay community stage demonstrations against a police raid on an inn in the Greenwich Village area, and the creation of the Pride movement.

“So we’re thrilled to light up one of Ireland’s iconic landmarks to celebrate everything Pride stands for,” he said.

Aviva will also be sponsoring the Dublin Pride Run, which raises funds for a number of Irish LGBTI+ charities, and more than 100 of its staff will march in the Pride parade, which takes place on June 29th in Dublin.