Katie Taylor arrives home after fight to displays of devotion 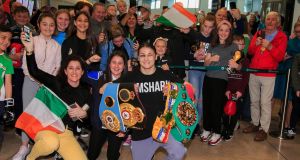 There aren’t many Irish sports stars, no matter how high profile, that seem to spark spontaneous displays of devotion like Katie Taylor.

“You’re my inspiration,” a young female voice called from the crowd of around 200 which had gathered at Dublin Airport to welcome home the undisputed lightweight champion. “Katie you’re a legend! You’re an absolute inspiration!” echoed an older, male voice.

If Taylor’s fans were in any way worried by the controversial nature of her victory, which saw her opponent Delfine Persoon storm from the ring in disgust and several commentators opine that the Belgian had won the fight, they were not showing it.

“I like that she’s an Olympic medallist and a world champion boxer,” said Lucy Molloy (10), who boxes at Corinthians Boxing Club and had turned up at the airport with her four-year-old sister.

Sarah Murphy, who was celebrating her 12th birthday, was allowed the day off school to welcome home her hero. Sarah is already a national underage champion, and shrugged off questions about Taylor’s close fought victory.

Whatever about the fighting spirit inside her, Taylor couldn’t shake the Minister for Sport from beside her, who accompanied her from the moment she emerged into the arrivals hall. In an impressive showing, Ross ducked some gentle ribbing from the crowd, fighting to shadow the boxer as cameras flashed and rolled. Scores of fans will treasure their photo with the champ, but they may be puzzled by the omnipresent, cheerful, besuited man lurking over their shoulders.

Katie – sporting an impressive shiner and several cuts on her face – and her manager, Brian Peters, rolled with the punches when hacks jabbed at them with questions about the reaction to her victory.

“[It] definitely doesn’t take the shine off for me,” Taylor said. “That’s what happens in close fights.”

Peters was on message too: “It’s subjective scoring, and the only people whose scoring matters is the judges. And once you get them, you’re happy,” he said.

When it looked like Taylor and her entourage were about to get moving without Shane Ross making an address, the shadow Minister told Taylor’s manager “I just want to say one word”.

One hundred and thirty-eight words later, Mr Ross released Taylor into the waiting arms of her fans, where she posed for pictures and signed gloves. She enjoys this aspect of her celebrity, especially when it involves encouraging young women to be active in sport, much more than touting her next fight.

The fighter had done her best to stoke the flames earlier promising a rematch with Persoon and talking of a “great rivalry”, a line that was also proffered by Peters. But there’s little chance of Taylor pursuing this rivalry in a meaningful way in front of a home crowd. The same company that benefits most from the Taylor hype, streaming service DAZN (pronounced Da Zone), are insistent that she will fight in the USA.

“DAZN are the TV company and they pay our wages, so unfortunately we’re dictated to by them, and they want it on primetime, and probably after the other night they’re going to want us on primetime America time,” he said.

Talk of civic receptions and statues in Bray visibly puzzled the boxer (“you’re only supposed to get a statue when you’re dead!”), who, after six months in the near isolation of her Connecticut training camp had her sights set on home comforts.

“I’m going to put my feet up for the next few weeks and spend time with my nephews and nieces . . . it’s great to be home, and I’m going to enjoy family time, and rest up and recover.”

Wicklow County Council later confirmed there would be a celebration of Taylor’s success on Bray’s Seafront on Friday from 7pm. More information will be made available via www.bray.ie