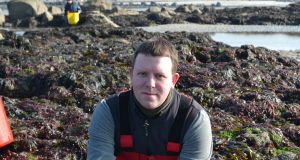 Dr Liam Morrison of NUI Galway, who has led a new study on the impact on human health of arsenic in seaweed used for animal feed, collecting samples of Ascophyllum Nodosum seaweed on the shoreline.

Arsenic found in a type of seaweed harvested on the Irish coastline for use as animal feed has a “negligible impact” on human health, a study led by an NUI Galway (NUIG) scientist has found.

While the most commercially important seaweed, Ascophyllum nodosum does not pose a risk, kelp should be the focus of more research, the lead scientist, Dr Liam Morrison of NUIG’s Earth and Ocean Sciences department, says.

Brown seaweeds have a capacity to accumulate arsenic, which may be of natural origin in the marine environment as a result of interactions between seawater and rock - or associated with human activity, Dr Morrison says.

Arsenic is a class 1 carcinogen, but compounds vary in toxicity. Inorganic arsenic is considered more toxic than its organic form, he explains.

Dr Morrison, who is joint author of a previous study which found “elevated” levels of arsenic in some groundwater supplies in the north-east and south-west, said that much depends on the levels of the toxin.

This latest study, published in scientific journal Environment International, was commissioned to inform State agencies and suppliers of the risks, given a forecast increase in consumption of produce from animals reared on seaweed feed to match growing world populations.

The scientists focused on feed used in production of beef, milk, chicken and eggs.

They collected data on arsenic levels in Ascophyllum nodosum harvested on the Irish west coast over a five-year period from 2012 to 2017.

The study found a “very low carryover rate” of arsenic compounds from seaweed animal feed into livestock produce, and concluded that the threat to the general population was “negligible”.

However, Dr Morrison said that the study did not cover other types of meat, including lamb.

He also said that kelp tended to show higher levels of inorganic arsenic, and further research was required on its impact, given its role as a constituent in food supplements.

The study notes that the global market for seaweed animal feed is worth US$11.34 billion annually, and accounted for roughly 2.5 per cent of the global animal feeds market in 2016.

It quotes conservative estimates of the current value of the seaweed industry at between US$10 billion and US$16 billion.