The Air Corps dumped more than 150,000 litres of water on Bray Head during a two-day operation to stop a wildfire that devastated sections of the popular hiking trail. Video: Nick Eogans 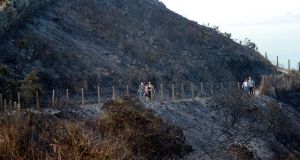 The operation to fight a wildfire on Bray Head, Co Wicklow, will cost tens of thousands of euro, with sections of the popular tourist trail reduced to a “blackened, lunar landscape”, Wicklow’s chief fire officer has said.

Aidan Dempsey said he was also “personally very concerned” about at least three homes at the height of the fire on Saturday, one of which was voluntarily evacuated, as the blaze reached back gardens on the south side of the headland.

“One in particular where the family left, but the father stayed on as an extra pair of eyes, the fire came down a very steep, rocky slope that was inaccessible to us, and at the base there was four-metre-high vegetation, trees, bushes and gorse — which ran all up to the house,” he told The Irish Times.

“We were fighting it, we were to the pin of our collars to hold it. Then the Air Corps focused on that one area alone for an hour.”

Two Air Corps pilots and one crewman on board an Augusta Westland AW139 helicopter worked through poor visibility in the thick smoke and searing heat, repeatedly taking water from the Irish Sea and dousing the outbreak.

They dumped more than 150,000 litres of water during a two-day operation, and remain on standby in case the blaze flares up again, as round-the-clock monitoring of the area continues.

Mr Dempsey said some small pockets rekindled at around 10am on Sunday but that the “current outbreak is under control”. However, he warned the dry conditions mean there remains potential for fires to start up again.

What cant be seen is the house in the woods just meters away that had been evacuated and was in imminent danger and the #Firefighters battling to save a family’s home and possessions. The @IrishAirCorps #helicopter crew had little room for maneuver. #wildland #BrayHead @OC3OPS pic.twitter.com/jbXhodQS2G

The chief firefighter said the blaze had resulted in distressed birds and wildlife fleeing, although some living under the surface would not have been able to escape. Delicate plants that may have been part of the protected landscape for thousands of years face obliteration.

“It has completely eliminated parts of the amenity — we now have an area, a blackened, lunar landscape compared to what was lush vegetation,” he said.

Mr Dempsey said “all indications pointed to a campsite on Bray Head” as the origins of the fire, adding Wicklow Fire Service had given all relevant information to the Garda.

It is expected the cost of the operation to bring the fire under control will run into “tens of thousands of euro”, he added.

The Air Corps has been assisting firefighters around the country every day for the past three weeks, as wildfires sparked in Cork, Limerick, the Slieve Bloom mountains in Co Offaly, and the Wicklow and Dublin mountains, as well as a cross-Border operation into Slieve Gullion in south Armagh during the week.

In total, it has dropped 750,000 litres of sea and lake water — the equivalent of 1.5 million regular bottles of water — onto fires.

Meanwhile, Met Eireann has warned there will be no let-up in the drought conditions, as water restrictions escalate across Dublin and other parts of the country.

Forecaster Vincent O’Shea said there will be a “short term temporary break” from the prolonged dry spell on Sunday, but it would make no real difference in terms of plunging reservoir stocks.

“Most parts of the country will get some rain, albeit very little in some parts,” he said.

“It will appreciable enough in parts of the south and west of the country; they’ve already had between 5ml and 10ml.

“But the crux question here is whether it will alleviate the drought conditions — the answer is probably not. It will make no difference to the reservoirs — it is debatable whether it will even help lawns return to green.”

Very little rain is expected for following few days. Temperatures will be cooler during the week, with maybe some rain on Thursday and Friday, before temperatures rise again at the weekend, latest predictions show.