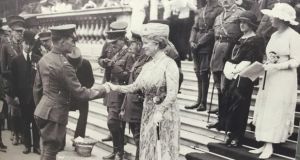 There are 623 graves for British military personnel in Grangegorman Military Cemetery in Dublin. Each headstone is identical to the other being, according to the old imperial measures, 30 inches (76 centimetres tall), 15 inches (38cm) wide and two inches (3.2 centimetres) thick. They are made of white Portland Stone.

The grave of Martin Doyle, tucked into a corner at the entrance of the graveyard, looks like all the rest, but it is not a real Commonwealth War Graves Commission headstone.

Its real provenance is in the inscription at the bottom - “erected by his old comrades in the regiment” - the regiment being the Royal Munster Fusiliers.

Martin Doyle, who was originally from New Ross, Co Wexford, died at the age of 45 in 1940 from polio. During the first World War he won the Military Medal in March 1918 leading a bayonet charge on a fortified German barn in France.

He then followed it up on September 2nd 1918 near Reincourt in France, when as a company sergeant he led a group of his men to safety, prevented German soldiers from storming a tank and then single-handedly rushed a machine-gun nest capturing three prisoners. His citation published in the London Gazette praised his “total disregard of danger”.

In June 1919, and still dressed in his Royal Munster Fusiliers uniform, he received the Victoria Cross from King George V at Buckingham Palace.

A month later he left the British army after nine years. In October 1920 he took up arms against Britain when he joined the IRA in East Clare acting as an intelligence officer.

Afterwards joined the National Army during the Civil War where he was shot in the hand by former colleagues in the IRA and remained on in the Irish Army.

In 1937, he applied to be compassionately discharged as he had been offered a job in Guinness, a company particularly well disposed to Irishmen who had served in the first World War.

His wife was sick at the time. For such a brave man physically, his fears over his family’s health and financial stability are all over his correspondence with the Department of Defence.

“Ihave been very badly treated. Surely I deserve at least the same treatment as other ex British soldiers who served the cause in 1920 and 1921?” he wrote.

Privileges such as early discharge were afforded to those who could prove service in the IRA prior to the truce of July 1921. In order to qualify for early discharge, Doyle put together a list of testimonials from those he served with in the IRA.

One from Patrick McMahon stated that Doyle “worked and done everything possible for the IRA during the years 1920/1921”.

McMahon’s testimony would suggest that Doyle would have left the British army to “go to the hills” quicker, but was advised that he was more valuable in the British garrison in Ennis than out of it.

“I succeeded in convincing him that he was more useful inside the British Bks (sic) at the time notwithstanding that both of us were appreciative of his position which was looked upon with suspicion at the time”.

Doyle eventually succeeded in getting employment in Guinness. On Sunday he will be honoured by the British government, despite his service in the IRA, when a VC paving stone in his honour will be unveiled at Glasnevin Cemetery as part of the Armistice Day commemorations, commemorating the centenary of the end of the first World War. He will be remembered along with four other Irish VC winners.

Remarkably, his three daughters, Bridget, who is 98, Charlotte, who lives in the United States and Mary, who lives in Dublin, are still alive.

His great-grand nephew Leighton Thomas said Martin Doyle was buried as a British soldier at the request of his old comrades who paid for the headstone as the family were too poor at the time.

He also stressed that Doyle was an honourable man who served the army of Ireland as it was at the time, first the British army, then the IRA and finally the National/Irish army.

“Martin Doyle told a relative that he won the Victoria Cross for the wrong army,” Mr Thomas said.

“Like a lot of Irishmen, he believed Ireland would get her freedom after the war. He was always trying to serve Ireland, not the British.”