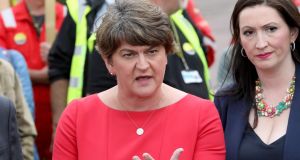 The DUP and Sinn Féin have condemned sectarian and offensive slogans seen on an anti-internment bonfire in Newry on Thursday night.

Images of the bonfire containing the slogans were shared on social media before the bonfire was lit in the. The bonfire was marking the anniversary of the introduction of internment without trial which was introduced in Northern Ireland at the height of the Troubles in 1971.

“My heart goes out to the families who are impacted by this tower of hate. Those who built it evidently have a lot of bitterness and hatred in their hearts. It stands in contrast to the dignity and grace of the innocent victims who today sit with empty chairs,” she said.

This deplorable sectarian bigotry has no place in this society. This is not Republican. This is not acceptable. pic.twitter.com/DFiX2DOGro

Sinn Féin’s leader in the North Michelle O’Neill Tweeted: “This deplorable sectarian bigotry has no place in this society. This is not Republican. This is not acceptable.”

On Thursday night, Ulster Unionist Party councillor David Taylor condemned as “reprehensible and despicable” the organisers of the bonfire which was erected at Parkhead, Newry.

He said a number of items were placed on the bonfire glorifying the dissident republican murders of PSNI Constable Stephen Carroll and prison officer David Black and other republican killings.

The organisers also make reference to the recent death of William Frazer, who campaigned on behalf of victims of republican violence and whose father, Bertie, and four other members of his family were murdered during the Troubles.

The bonfire also gloats over the 18 British soldiers who were killed in the IRA Narrow Water bomb attack in 1979 near Warrenpoint, Co Down, Mr Trimble said.

It also features British union, Ulster red hand and Orange Order flags as well as a reference, “FTQ”, or “f*** the Queen”.

Mr Taylor said he reported the matter to the PSNI. “Once again a multitude of hate crimes have been committed by the organisers of an internment bonfire erected at Parkhead, Newry and they should be roundly condemned for their sickening actions,” he said.