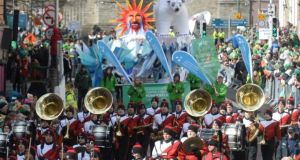 A decision to restrict or cancel the St Patrick’s Day parade in Ireland over coronavirus fears would be “premature” at this stage, the body representing the country’s tourism industry has said.

Eoghan O’Mara-Walsh, chief executive of the Irish Tourism Industry Confederation (ITIC), said public health officials “have to be prudent, but we also have to be proportionate.”

When questioned about the possibility of the Dublin parade being restricted or cancelled, he said it was “premature to consider that” or to make such a decision.

“The St Patrick’s Day parade was “very much the springboard and the launch pad of the Irish tourism season, so we have to protect it where at all possible,” he said, adding that “public health obviously comes first.”

“Overseas visitors to Ireland could well be challenged this summer for a whole variety of reasons, Brexit is still out there, but coronavirus has come from left field,” Mr O’Mara-Walsh said.

He was speaking at the launch of Tourism Day, April 17th, where more than 100 tourist attractions in Ireland will offer free tickets and special tours and events.

The coronavirus, officially known as Covid-19, has continued to spread across the globe, with Italy the first European country to be hit with a major outbreak in the north of the country. By Thursday afternoon 14 people had been reported dead.

There has been no confirmed case of the virus in Ireland yet, with 90 suspected cases testing negative.

In a statement, the St Patrick’s Day Festival organisers said they are awaiting a coronavirus risk assessment criteria for large public gatherings, which was being drawn up by an expert sub-group of the National Public Health Emergency Team (NPHET).

“We have underscored the very urgent need for this documentation to be made available to the festival, so that an informed and prompt decision can be made regarding our forthcoming events,” the statement said.

“St Patrick’s Festival will take a measured and proportionate response to the public health threat of COVID-19, in line with the guidance and recommendations of the HSE, the NPHET,” it said.

Niall Gibbons, chief executive of Tourism Ireland, said it was still planning to go ahead with overseas St Patrick’s Day promotions despite coronavirus concerns. “It is important to remain calm and measured,” he told RTÉ radio’s News at One.

Tourism Ireland is responsible for promoting Ireland overseas and had scaled back its activities in China and has cancelled some marketing activities planned for Milan this weekend, Mr Gibbons said.

Yesterday, the Irish Rugby Football Union (IRFU) confirmed the Six Nations Ireland vs Italy matches to be held early next month would be postponed due to the outbreak of the virus in northern Italy.

On Friday, Dr David Nabarro, World Health Organisation (WHO) co-ordinator for the response to the coronavirus warned there could be “multiple waves” of the virus.

“The world is getting ready for more outbreaks, it’s been only seven weeks. We need to ramp up readiness,” he told RTÉ radio’s Today with Sean O’Rourke show.

“It is going to go on spreading, we are doing everything to help people and working to keep it the lowest possible levels,” he said.

Decisions to stop events such as sports games, religious services and public gatherings had to be taken at local level to prevent transmissions, he said.

As the virus becomes more prevalent there will be a need for greater “social distancing”, he said. This is where people keep a distance of a minimum of two metres from other people.

Dr Nabarro explained that the virus remains viable on surfaces for three hours, which was why it was important for people to cough into the crook of their arm, and wash their hands thoroughly using soap and water or anti-bacterial wash.

When asked about the possibility of the Olympic summer games in Tokyo being cancelled, Dr Nabarro said it was too early to take that decision. However, he said it would be wrong to imagine that the virus “will fade away.”

HSE director of public health Dr John Cuddihy, who has co-ordinated the response to the virus, told the programme that there had been a review of ICU facilities ahead of any outbreak of the virus in Ireland.

He was responding to concerns raised by Michael O’Dwyer, head of anaesthesia and critical care in St Vincent’s Hospital, Dublin, who said that Ireland will struggle to deal with even a small number of severely ill patients should coronavirus cases occur here.

Dr O’Dwyer had said there was no capacity in the main Dublin hospitals to cater for extra patients requiring intensive care, as repeated calls in recent years for extra ICU beds have been met by a “head-in-the-sand” response from the HSE.

Aontú leader Peadar Tóibín TD has called on the Government to recall the Dáil to provide deputies with a full briefing on the coronavirus, to tackle growing confusion among the public.