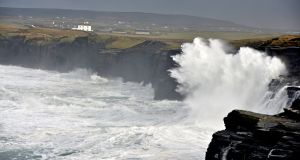 An orange warning means there will be ‘infrequent and dangerous weather conditions’. Photograph: iStock

Counties Galway, Mayo, Clare and Kerry are covered by an orange wind alert from 6am on Saturday until 3am on Sunday.

The forecaster says severe winds are expected during Saturday associated with the storm which is expected to bring gusts of up to 130km/h and an elevated risk of coastal flooding.

The second orange wind warning for Donegal, Leitrim and Sligo is in place from midday on Saturday until 3am on Sunday.

A status yellow rainfall warning is in place for Munster, Connacht and Donegal from midnight on Thursday until midnight on Saturday. Rainfall accumulations of up to 30mm are expected during Friday and Saturday generally but 40 to 50mm of rain could fall in parts of Kerry.

There is “a continuing risk of flooding” due to already saturated ground and elevated river levels, the forecaster added.

A fourth, yellow weather alert, for wind, is in place for Leinster, Cavan, Monaghan, Roscommon, Cork, Kerry, Limerick, Tipperary and Waterford between 9am on Saturday and 3am on Sunday. Gusts of up to 110km/h are expected during this period.

An orange warning means there will be “infrequent and dangerous weather conditions which may pose a threat to life and property”.

Met Éireann said: “Prepare yourself in an appropriate way depending on location and activity. All people and property in the affected areas can be significantly impacted. Check your activity/event and delay or cancel as appropriate.”

The yellow warning indicates weather “that does not pose a threat to the general population but is potentially dangerous on a localised scale”.

A meeting of the the national emergency co-ordination group will take place on Friday. It has been convened as a result of “the prolonged period of very wet weather, the flooding that has already occurred and the potential impact of Storm Jorge, due to hit Ireland this weekend”.

Storm Jorge, named by the Spanish Met Office, will begin with a low pressure centre that will track just across the north of Ireland on Saturday.

“Our personnel have deployed in two primary regions. The first one was in Co Limerick near Castleconnell and the second one in the Carnakilla area of Co Westmeath.”

A number of roads across the country were flooded on Thursday, with the west the worst affected.

Train services on the Dublin to Sligo rail line, which has been impacted by flooding, were operating on Thursday with 20 minute delays after water levels dropped slightly on Wednesday.

However, services between Gort and Athenry were suspended due to rising water levels, with bus transfers operating between the two locations.

According to an Irish Rail spokesperson, the company has invested in significant work on the line in the Carrick-on-Shannon and Dromod area in recent years and had raised the line in the areas that are prone to flooding during adverse weather conditions. The line is also prone to flooding as it passes near Lough Owel on the outskirts of Mullingar.

Senior engineer at Roscommon County Council Eugene Dwyer says that while water was still on the rise in the rivers, this was not at the same pace as earlier this week.

However, concern is now turning to turloughs, where levels are steadily on the increase from ground water sources.

The Department of Social Protection announced on Thursday that it was activating its humanitarian assistance scheme to support householders affected by the flooding.

The scheme, which is administered by the Irish Red Cross, provides financial assistance to people who are not able to meet costs for essential needs immediately following flooding or severe weather events.

Minister for Business, Enterprise and Innovation Heather Humphreys said the scheme would contribute towards the cost of returning small businesses, sports clubs, and community and voluntary organisations to their pre-flood condition, including the replacement of flooring, fixtures and fittings and damaged stock where relevant.

The first stage of the scheme will see affected groups receive up to €5,000 depending on the scale of damage. If the cost of repairing damage caused by the floods exceeds €5,000, a second stage of support will be provided, according to the department. Total financial support will be capped at €20,000.

The scheme does not provide a contribution to loss of earnings or loss of business.

Minister of State for the Office of Public Works and Flood Relief Kevin “Boxer” Moran has called for a farm recovery grant to assist farmers struggling with livestock issues and damage to farm buildings.

“The UK government have launched a similar fund in recent days and I believe that we should do the same here,” said Mr Moran, who lost his seat in the general election. “Some €2 million has been made available by the UK government to support their farming community and I think that is something we need to look at here also.”

5 Covid-19: AstraZeneca has told HSE vaccine deliveries can be expected by mid-February