Magnificent animal roamed the country 7,000 years ago and then died out 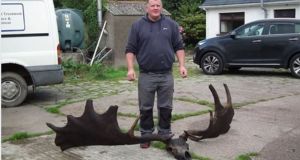 Raymond McElroy pictured with the antlers and skull of a Great Irish Elk, taken up today by a net in Lough Neagh. Photograph: Ardboe Gallery, Facebook

Fishermen Raymond McElroy and Charlie Coyle thought their nets had snagged on an old piece of dead tree at the bottom of Lough Neagh.

It had been a bad night’s fishing and when they ventured out to their nets on the lake at 4.30am, they found they had caught no fish, yet the net was straining.

It took two of them all their strength to lift the net from the lough floor. By the weight, they figured it might be a piece of a dead tree snagged at the bottom.

Instead, it was the perfectly preserved antlers of a giant Irish elk. Now extinct, this magnificent animal stood more than two metres tall and had antlers of up to four metres in diameter.

Though called the Irish elk because their skeletons have been found in the bogs of Ireland, they roamed across most of northern Europe, but died out 7,000 years ago in mysterious circumstances.

One of the largest collections of such deer is in the National History Museum in Dublin.

Mr Coyle said he got a fright when the two metre wide antlers came out of the water. “I thought it was the devil himself. I was going to throw it back in. I didn’t know what to do with it.”

Mr McElroy said he recognised straight away that it was the antlers of a giant Irish elk. The jawbone of possibly the same animal was recovered from the lake in 2014.

The antlers are now in his garage awaiting a new home.

He is seeking interested parties from what had been a fishing trip that will live long in the memory.