‘Self-directed learning’ underpins the ethos of the new Sudbury School, in rural Sligo 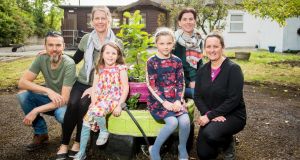 As thousands of children settle back into classrooms under the watchful eye of their teachers, students at a new school in rural Co Sligo will be free to choose their own subjects and timetables.

The Sudbury School of self-directed learning is a school with a difference. It is run by “direct democracy” in which students and staff are treated as equals.

Students also have complete responsibility for their own education. A core part of its ethos is that students can decide what to do with their time such as climbing trees, reading, or surfing their tablets.

They are free to explore their own learning pursuits and interests, in their own time, style and at their own pace

It sounds, in short, like a helicopter parent’s worse nightmare. But it is proving popular with families who are keen for a break from the mainstream model of education.

It’s the second such school to open in Ireland, with its Wicklow counterpart now starting into its third year with 28 pupils.

It doesn’t come cheap, though. The community-based project in Sligo does not receive any government funding and so charges tuition fees of €3,900 a year, costs which the school says are in line with many fee-paying schools. In the Wicklow model, fees start at €2,400 and rise depending on gross household income.

In addition to local children who have enrolled in the Sligo start-up, a number of families are relocating from Dublin, Meath and Kerry as well as moving home from Australia, America and Malta to ensure their children are part of a democratic community, according to founders Gayle Nagle and Maura Duignan.

“Parents are choosing the school so their children can engage in the natural process of experiential learning and to be part of a self-governed democratic community,” says Nagle.

“They are free to explore their own learning pursuits and interests, in their own time, style and at their own pace and they have the space to get to know themselves better and to develop, expand and refine self-awareness.

“They also learn how to be part of a community which values individuals and autonomy and ensures responsibility and respect for all.”

The Sudbury School is not subject to Department of Education inspections. However, it is registered and assessed by Tusla, the Child and Family Agency. Nagle adds that self-assessment is also integral to them.

There are many Sudbury School worldwide, all independent, but generally all influenced in their ethos by writers such as AS Neill, John Holt, and Peter Gray

Both Nagle and Duignan had been home-schooling their own children but liked the idea of a more social setting for their kids to meet others while continuing to follow their own pursuits.

“Maura and I met through the home-education network,” says Nagle. “We had both been home-schooling for a number of years, but liked the idea of allowing children the freedom to educate in their own way and pace with other students.

“Sometimes access to other children can be an issue when home-schooling. I have a background in education and while we are not against the current system at all, we just feel mainstream education is successful for some children but not for others. Sometimes the one-size-fits-all just doesn’t work.”

There will be no imposed curriculum for the students but Nagle stresses that there will be a number of rules to be observed, which are formed through the school’s democratic process.

“One law is that all members of the community have the right to go about their day in a peaceful way,” she says.

Regular school meetings will involve all children who use their vote on various issues they’d like to see changed or employed.

“Children can read all day if they want, but you’ll find that different groups will all go and play together for a few hours, then maybe make something to eat and then do another activity,” says Nagle. “They learn at their own pace, in their own time and in their own way.”

She explains that external tutors may be employed for specific subject areas if these skills are not available among the staff.

“You can’t live a day without using maths in some form but if, for example, a child needs algebra for a project and wants additional support with it, then by all means, we will get a tutor in for them.”

She argues that students at Sudbury will thrive at third-level colleges, having developed a high internal motivation to study their already nurtured interest.

“Students have only known self-learning through the Sudbury model so are already disciplined to study at third-level,” she says.

“At that stage, they have also honed in on their interests so often their course choice reflects perfectly on this.

“Many colleges are now allocating places for children coming from home-schooling or models like Sudbury but if students wish to sit any kind of exams, they will be also supported in that.”

At the Wicklow Sudbury School, demand for places has grown so that the self-funded charity in Kilpedder is now seeking a bigger property in the north of the county to cater for more students.

Over the two years, founders and staff in Wicklow have, they say, recognised huge changes in each child.

“In that time, most students have gone through different phases of dealing with the freedom of time and space they are given and many of the six to 16-year-olds have developed a clearer idea of goals they want to set themselves,” says the Wicklow school’s co-founder Sonja Luescher Keogh

“Others have found satisfaction in exploring more spontaneously, mainly joining the various activities at the school including music, art, programming, bushcraft, film-making, sports and writing.”

One 16-year-old student received a diploma in criminal and forensic psychology earlier this year, while a 14-year-old recently started a degree in philosophy, economics and politics with the Open University.

“The children and adults have collectively created their own community rules and procedures and taken ownership of the school,” she says

“The effect that this aspect alone has on each person’s sense of responsibility and self-worth is significant.”

‘Students here seem happier and less stressed’: Why one student opted for the Sudbury School

Kate Burns (14) jumped at the chance of ditching mainstream education for a system she has spent the past two years researching.

“I’m really excited. I just feel that kids learn so much better when they can choose what they’d like to be taught,” she said.

“I’m really interested in politics and so I was researching school systems online for a few years and Sudbury kept coming up.

“Students seem happier and less stressed. There are such a lot of students stressed here and it’s insane that it’s overlooked.

“I was stressed at mainstream school with being told what, and what not, to do. I’m the kind of girl who will keep asking why and I think Sudbury will give me answers that I couldn’t get in mainstream education.

“I often fell behind at school in Irish but here I can go back to easier levels and learn at my own pace how to be fluent instead of stressing to catch up.”

Her mother, Dorothy, is backing her daughter all the way.

“Education is like a buffet of everything and kids are force-fed in mainstream schools,” she says.

“Here she can pick and choose what she wants. The bottom line is she’s happy. I was dragging her out of bed each morning and watching her go to school upset – that couldn’t carry on.”