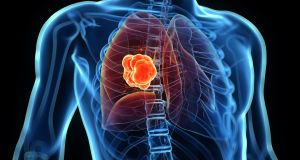 Nivolumab is already approved for use in cases of melanoma, renal cancer, Hodgkin lymphoma and a form of cancer affecting the head and neck, and has now been approved for lung cancer.

The Health Service Executive (HSE) has recommended the use of the potentially life-extending cancer drug nivolumab (sold as Opdivo) for patients with advanced lung cancer.

Hundreds of eligible patients with the deadliest form of cancer in Ireland can potentially benefit from nivolumab with immediate effect, if prior chemotherapy has failed.

The decision marks the fifth cancer type for which the HSE has recommended nivolumab, demonstrating its potential as an immunotherapy treatment for some of the most common advanced cancers. It is manufactured by Bristol-Myers Squibb (BMS).

Nivolumab has been one of a number of treatments at the centre of a pricing controversy involving the HSE and the Department of Health. Depending on the type of cancer it is used to treat, the cost of the drug could range from €50,000-€100,000 per patient per annum.

In Ireland, more than 2,000 new cases of lung cancer are diagnosed each year on average, making it the fifth most common cancer in the Republic. Around 2,000 deaths are attributed to the disease annually, accounting for over 20 per cent of all cancer deaths. The drug has an innovative mode of action by harnessing the ability of the immune system to fight cancer.

“For hundreds of Irish lung cancer patients, today’s decision signifies an important milestone and a significant step forward in the treatment of this devastating disease. Nivolumab has demonstrated its potential to extend life, and to improve quality of life.”

“People battling cancer deserve to have access to the latest innovations in treatment available to them, and today’s decision shows great commitment to bringing a new option to those most in need,” she said.

“This decision demonstrates our continued commitment to providing patient access in many difficult-to-treat cancers.”

Nivolumab is already approved for use in cases of melanoma, renal cancer, Hodgkin lymphoma and a form of cancer affecting the head and neck.

The Government has applications for reimbursement of treatments in the public health service for nivolumab for eight separate forms of cancer.

In July 2016, Minister for Health Simon Harris ruled it would no longer be available for free to new Irish patients after its manufacturer discontinued a compassionate access programme while the State considered whether or not the drug would be cost effective to provide. BMS made the drug available for free to patients in response to an appeal by Mr Harris for “compassion” while the Government considered a decision on its approval.

In October 2017, its use for treatment of melanoma, kidney cancer and Hodgkin lymphoma was approved.