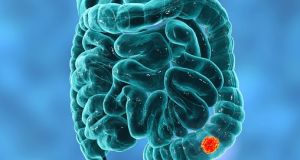 Researchers at Queen’s University Belfast have discovered a new treatment strategy for bowel cancer which they say could change the survival outcome for patients of the disease worldwide.

The study, which is considered the first of its kind, found that a therapeutic treatment process could target and kill bowel cancer cells and improve the health of patients who had originally been diagnosed with an extremely poor survival outcome.

The three year research project, which was funded by the late Chancellor of Queen’s University Belfast through the Tom Moran Scholarship, examined ‘gene signatures’ to find out whether the stress-response pathway of a bunch of cells, known as Unfolded Protein Response (UPR), could be used to treat bowel cancer among patients with a poor survival outcome or who had a resistance to other treatments.

The study compared two groups of bowel cancer patients one year after their diagnosis and found that one group was considered to be doing ‘well’ while the second had a poorer outcome.

Researchers focused on a human gene called Braf which contains a protein known as B-Raf and can send signals from the surface of a cell which leads to cell growth and survival. When mutated, the same Braf genes can cause normal cells to become cancerous.

While these Braf mutants are not a very aggressive form of cancerous cell, they do not respond well to conventional cancer treatments meaning patients diagnosed with this type of cancer are given a very poor prognosis.

However, researchers at Queen’s have now discovered a cellular process which they say can be exploited to kill these cancer cells.

“Essentially, we can take advantage of the aggressive biology of these cancers and use it against them,” said Dr Nicholas Forsythe, Lead Researcher at the Centre for Cancer Research and Cell Biology at Queen’s University.

The UPR pathway usually helps cells to survive periods of stress, he explained. However, in this study researchers found that highly stressed cancerous cells had “hijacked” the UPR in order to survive. “Using a specific combination of drugs we were able to overload this process and stress these cells to a point where they could no longer survive, dying in a process known as apoptosis; a form of cell suicide,” said Dr Forsythe said.

“This research is good news for bowel cancer patients as further clinical trials investigating the effect of such agents could improve the survival outcome of patients with these BRAFMT colorectal tumours in Northern Ireland and beyond.”

Researchers will now use the study’s findings to explore new drugs which they say could “ultimately change the survival outcome” for patients.