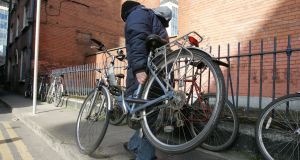 More than 80 per cent bikes would be impossible to reunite with their owners even if the Garda did recover them because owners do not know the bike’s serial number. File photograph: Frank Miller

The value of bicycles stolen in the Republic over the past 2½ years has been put at €7.1 million, though the true figure may be much higher.

The Garda said many people targeted by bike thieves did not report the theft. And because of that it was impossible to determine more accurate figures.

Of the bikes reported stolen, the serial number was known for fewer than one in five. It means more than 80 per cent bikes would be impossible to reunite with their owners even if the Garda did recover them.

With schools and colleges returning and dark evenings also back after the summer break, gardaí are now urging those who cycle to take security precautions.

They are aware of 14,000 bikes having been stolen since 2016, at an average valuation of €510. And gardaí insist cyclists need to improve their approach to security around their increasingly expensive bikes.

“There is a trend of not reporting theft of bikes to gardaí which makes it difficult for us to reunite any recovered bikes with their owners.

“If your bike is stolen, report the theft to gardaí as soon as you can. If you are buying a second hand bike, look for proof of ownership before purchasing.”

Bike theft increased by 7.5 per cent last year, with 14,000 bicycles reported stolen to the Garda in the 2½ period to the end of June.

While one third of bikes were stolen from the owners’ homes, over half – some 53 per cent – were stolen off the streets. And more bikes are stolen on a Friday than any other day of the week.

In Cork today, the Garda launched its winter “lock it or lose it” campaign which urges cyclists to invest between 10 and 20 per cent of a bike’s value in a lock and to always secure their bikes.

Garda added the serial numbers of all bikes should be recorded and bicycles should be photographed. It has advised cyclists to email the photo and number to themselves so they can access it in the event their bikes are stolen.

Bikes should be locked in-doors and in well-lit areas where possible, and always to an immovable object, including when locked on the street.