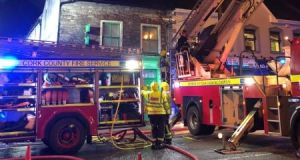 Mail processing for the Midleton area is carried out at a separate location and so was not impacted by the fire. Photograph: Cork County Fire Service/Twitter

An Post has begun putting postal and social welfare arrangements in place for people in Midleton after a fire damaged the post office in the town in early hours of Wednesday morning.

Two people, a woman in her 80s and her daughter managed to make their way from an apartment over the post office on the Main Street after fire broke out in the building at around 1.30am.

According to Midleton Fire Brigade station officer, Mark Sinclair, the pair had a lucky escape after they were alerted by smoke alarms which activated.

“Smoke alarms save lives and that’s exactly what they did - this woman and her elderly mother were alerted when fire broke out and they managed to get out with help from gardaí,” he said.

Mr Sinclair said the Midleton and Cobh units of the Cork County Fire Service managed to bring the blaze under control within 30 minutes but spent almost seven hours dampening down hotspots.

Gardaí were waiting for the building to be made safe before carrying out a technical examination but early indications suggested there was nothing pointing to the fire being started deliberately.

Meanwhile an An Post spokesman confirmed that Midleton Post Office will be out of service for “the foreseeable future” as a result of the fire which caused considerable damage to the building.

He confirmed that An Post was making arrangements for general post office services to be made available in both Carrigtwohill and Castlemartyr Post Offices which are 9kms or less away.

“All Department of Employment Action and Social Protection customers will be catered for at Castlemartyr post office.

“Midleton is a busy post office and once we have dealt with the immediate aftermath of the fire and assess the damage done we will begin the work of restoring a full service to Midleton.

“Fortunately all our mails and parcels processing for the Midleton area is carried out at our delivery service unit at a separate location and so was not impacted by the fire,” he said

1 Dr Tony Holohan expected to return to his post next week
2 Covid-19 infections from funeral led to a third of restaurant’s staff self-isolating
3 Coronavirus: 442 new cases, 4 deaths as stricter house visitor limits recommended across the State
4 How one couple’s weekend away resulted in 30 Covid-19 cases
5 Return to normal life, Russians were told – except for Vladimir Putin
Real news has value SUBSCRIBE