How Bishop Eamonn Casey's fall from grace came to light

The Kerry cleric was reluctant to admit fathering a child 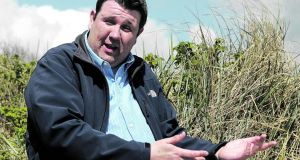 When he was a child, Peter resolved that one day he would force the bishop to acknowledge him publicly as his son.

In May 1988, a man called Arthur Pennell confronted Bishop Eamonn Casey at the door of his residence in Galway. He said he was the partner of Annie Murphy in Connecticut and he was helping to bring up her son, Peter, who had been fathered by the bishop. “What are you prepared to do about it?” he asked.

The Bishop of Galway refused to admit Peter was his son and turned him away. It was the start of a series of events that would see the popular bishop disgraced and forced into exile.

When Pennell returned to Connecticut, Murphy decided to take legal action against Casey on the grounds that her health had suffered from his actions. The bishop recruited a lawyer-priest from Brooklyn, Msgr James Kelly, to act as intermediary.

As a result of the negotiations, which concluded on July 25th, 1990, the bishop sent Murphy two cheques, for $90,000 and $8,000, while not admitting paternity. He came to New York to sign the necessary papers.

There was a chance it might have ended there, but on that visit to New York the bishop unexpectedly met his son for the first time. As Peter later recalled, it was a five-minute conversation and the bishop was “out of the door”. He felt his father treated him as “a small clerical error in his life”.

From then on Peter resolved that one day he would force Casey to acknowledge him publicly.

Annie Murphy subsequently made a new demand that the bishop should pay for Peter’s college education. Casey stalled. When the money was not forthcoming she decided to go public. Part of her motivation was her continuing anger with Casey over his dismissive attitude towards Peter.

In February 1992 Pennell called The Irish Times news desk in Dublin and claimed Casey was the father of a teenage boy in the United States.

In those days, before the Catholic Church was embroiled in paedophile sex scandals, there were good reasons for a newspaper to be apprehensive about accusing a bishop of fathering a secret love child. Getting it wrong could bring the wrath of the still-powerful Catholic establishment down on its head, discredit the paper, and involve crippling damages. The bishop was well regarded for his work for the homeless and for his progressive views.

From the start, however, it was evident the story was true. I was assigned to interview Annie Murphy at her apartment in Ridgefield, Connecticut, and found her to be a slim woman of 43, attractive, composed, but full of outrage and nervous energy, and utterly convincing. Peter was a strapping 17-year-old with a strong resemblance to Casey. 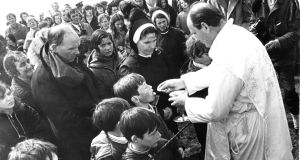 She told me in graphic detail about the affair she had had with Casey during a visit to Ireland to recover from a messy relationship in the United States. He was then 46 and Bishop of Kerry. She was 24. She gave birth to Peter in a hospital in Dublin, where the nuns tried to force her to give him up for adoption. Casey never admitted paternity, she said, but for 15 years he had sent cheques of up to $275 a month via intermediaries.

Casey had, in fact, started sending money again to help meet Peter’s college expenses. He had authorised two cheques, drawn on a Home Savings Bank in Brooklyn by Fr Kelly, for $6,500 and $3,350 towards Peter’s college tuition.

The then Irish Times editor, Conor Brady, determined to follow the money trail. The payments raised questions of public interest. Casey had no known personal wealth, which indicated that the money could have been misappropriated from diocesan funds.

While this was being pursued, Annie Murphy began new negotiations through Fr Kelly for a final settlement of $125,000 to $150,000 to pay for Peter’s university education.

At this juncture Pennell telephoned me to say, “Eamonn is going to give us that: 50 per cent right away, the whole lot by the end of the year.” Part of the deal was no publicity. “It has come to the point,” he said, “where I’m not interested in anything except $150,000 for Peter. If I have to, I will get a gun to do what I will have to do.”

He also claimed someone had been trying to kill Peter. They had complained to the police that their car had been tampered with five times by “professionals” who had loosened the wheel nuts. He and Annie Murphy suspected “agents of the Vatican”. The police in Ridgefield said they had dismissed their claims as groundless.

Publication was now inevitable, particularly if they were using the threat of exposure in The Irish Times as leverage in negotiations. Brady decided it was time to confront the bishop.

I called to see Fr Kelly at the Hispanic Parish of Saint Bridget in New York to convey a request for an interview. He telephoned Casey, who was holidaying in Malta, and the bishop agreed to meet us and explain about the money.

He said he would shortly leave Malta, pay a brief visit to Rome and then return to Ireland on May 5th. The interview was arranged for noon on that date in the Skylon Hotel near Dublin Airport. The bishop never turned up.

Next day The Irish Times began publishing the full story. The Vatican announced Casey had resigned as Bishop of Galway. It turned out that in Rome he had been instructed to return to Ireland, pack up and leave the country, without talking to anyone.

He left Ireland incognito on an Aer Lingus flight to New York, from where he issued a statement admitting he was Peter Murphy’s father and the money had been taken from diocesan funds – and replaced that week by “several donors”.

He stayed for six months in a contemplative monastery in the US before being despatched to Ecuador to work as a missionary priest for six and a half years. That was his “punishment”.

Ten years later Casey was allowed to return to these islands. He became a hospital chaplain in the Arundel and Brighton diocese in England. It was 2006 before he was able to return to Ireland. He settled in Shanaglish, near Gort in Co Galway.

In an interview with Tralee historian and broadcaster Maurice O’Keefe after his return, he said he had left Ireland when he did because he wanted “to get out before the media descended on me”.

Annie Murphy published a book about the affair. She then left Connecticut and went to start a new life in California with a different partner, an artist. Pennell has since died.

In the years after his downfall Casey quietly made his peace with Peter, who was then a student at the University of Connecticut. They became friends.

In an interview with The Irish Times in 2013, Peter criticised the Catholic Church’s treatment of the bishop. “It was ridiculous. I mean, six years’ penance in a foreign country and then the five years he spent in England made it even more egregious and more painful because of how close he was to his goal and all he wanted to do was go home and say Mass. Was that so terrible?”

1 Miriam Lord: Minister for Agriculture tries to get himself out of the manure
2 Passenger who promised driver a ‘few quid’ after crash awarded €10,000
3 Skeletal remains discovered in south Dublin were of man missing since 2011
4 Coronavirus: One more death and 24 new cases reported in the Republic
5 Barry Cowen tells Dáil he is profoundly sorry for ‘stupid’ drink-driving offence
Real news has value SUBSCRIBE