‘All we hear from Michael O’Leary is climate change denial’ 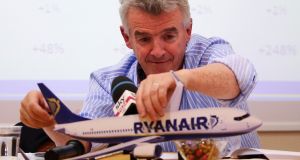 The modern airliner is a remarkable piece of engineering; a product generated by advanced aeronautics, materials science and fuel development – albeit of the fossil fuel variety. Good airlines routinely achieve superb efficiency. Aircraft are 70 per cent more fuel-efficient than 40 years ago. In short, they are getting greener.

That said, flying remains a polluting activity and generator of immense amounts of C02; the big contributor to global warming. And that is not likely to improve quickly. Global emissions arising from aviation account for some 2 per cent of total emissions, about 1 billion tons of CO2 a year.

And in spite of impressive enhancements and efficiency improvements, aviation emissions are projected to be about 70 per cent higher in 2020, according to London School of Economics climate change expert Nicholas Stern. “By 2050, they could be 300-700 per cent higher, or three to seven billion tons of CO2.”

The mushrooming of cheap air travel, frequency of flying and distance travelled all exacerbate greenhouse gas emissions. So much so, improved design and efficiency is being outpaced. Moreover, travel trends mean the individual passenger is responsible for a large carbon footprint – easily facilitated if living in a developed country.

Some contend the true impact of aviation is up to 15 per cent of greenhouse gas emissions. What’s not disputable are the EPA’s 2016 figures confirming emissions from Irish aviation increased 23 per cent. Ryanair’s emissions were up 14 per cent on 2015, at almost nine million tons.

Yet many commercial airlines are thinking harder about introducing alternative fuels and reducing emissions, Stern notes in his book Why Are We Waiting? In 2012 Airbus, Boeing and Embraer agreed to work together on development of aviation biofuels that are affordable and compatible with current fuels.

The aim is that by 2020 commercial aviation will be using some biofuels – there is an EU goal of using two million tons of sustainable biofuels in Europe’s civil aviation sector by that year. The International Air Transport Association, which represents global airlines, has set a target of 10 per cent “alternative” fuels in a tighter time frame.

Some airlines, such as Virgin, have been conducting biofuel trials since 2008. Ryanair “continues to actively monitor the availability of alternative fuels and supports the development of alternative fuels, such as biofuels, that meet international regulatory and sustainability criteria and are competitively priced”.

Ryanair has been waving its green credentials based on a strategy of acquiring the newest and “greenest, cleanest fleet of aircraft”, with the best noise footprint. “We are investing billions of euro in new aircraft and will begin to take delivery of the Boeing 737 Max 200 aircraft from 2019 onwards, with aerodynamic improvements which will reduce fuel consumption by up to 16 per cent in Ryanair’s configuration and reduce operational noise emissions by 40 per cent,” it points out.

Updating the fleet translates to a cut of emissions per passenger of 31 per cent, it says. It cites the latest Brighter Planet research report on the world’s 20 largest airlines showing that Ryanair is “the most efficient”, and with an average fleet age of six years. On that basis, the airline says it’s “Europe’s greenest, cleanest airline”.

“While Ryanair’s aircraft are among the newest and most efficient, this does not demonstrate a commitment to climate change,” says Joseph Curtin, a research fellow with the Institute of International and European Affairs. “This would require, for example, participation in the Carbon Disclosure Project, offering passengers carbon offsetting options, and, most importantly, acknowledging the reality of climate change and the company’s not insignificant contribution to it. Instead all we hear from Ryanair chief executive Michael O’Leary is climate denial.

“Carbon credits – a permit which allows the airline to produce a certain amount of carbon emissions and which can be traded if the full allowance is not used – are already a considerable cost for Ryanair, and as carbon prices increase, this could potentially put a break on the airline’s expansion plans,” he notes.

Notable emissions reductions, meanwhile, are being achieved by way of operational efficiencies. Ryanair leads, for instance, on passenger load and seating density. Design improvements continue unabated. Boeing’s 787 Dreamliner uses nearly half carbon-fibre-reinforced plastic and other composites that reduce weight by around 20 per cent on average.

Reduced fuel use and reduced flight times, for example, by flying at altitudes and speeds that give better fuel and performance efficiencies, play their part, Stern says. Better management in airports can reduce on-ground fuel use while better air-traffic control reduces use of holding stacks – the waiting rooms for arriving aircraft.

Since 2012 the EU has included aviation emissions in its Emissions Trading System, a market-based system to reduce emissions. It has been difficult to implement in the global context, but “domestic” airlines, including Ryanair, fully comply. There is, however, an International Civil Aviation Organisation agreement on a “global market-based mechanism” to address emissions from international aviation as of 2021.

More than 30 International Air Transport Association member airlines have introduced an “offset programme” either integrated into their online sales or linked to a third-party offset provider, so if travelling with one of these airlines it’s the easiest option to reduce carbon footprint.

Otherwise passengers have to search for an offsetting programme they are happy with, Curtin explains. Usually these involve supporting forestry, avoiding deforestation or rehabilitating degraded forests. “It can be time-consuming and involve quite a bit of due diligence for the individual to ensure that the programme is certified and delivers actual verified emissions benefit,” he adds. Climate Action Reserve has developed a quality assurance system to verify the quality of offsets, while, perhaps more relevant for air passengers, Green-e Climate helps individuals identify reliable “carbon offset sellers”.

Modern aviation continues to produce a nasty cocktail of pollutants including greenhouse gases. A low-carbon fuel with sufficient power density to ensure take-off of a passenger-laden jet has yet to be realised. “But the way things are moving, it’s quite possible that a battery-driven plane could carry a plane full of passengers across the Atlantic by 2030,” Virgin founder Richard Branson said this month.

In the meantime, rapid growth in aviation is set to continue – and, if airlines don’t deliver in a major way to cooling the world, the era of cheap air travel will be a memory fading into the past – while the effects of climate change, such as more frequent extreme weather events and turbulence, will increasingly disrupt flying itself.