The laws of physics seem to bend at Bray Air Display 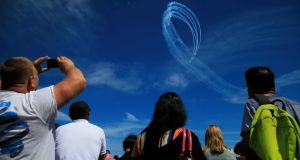 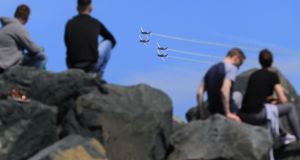 Pilots and aircraft from the Irish Historic Flight Foundation at the show in Bray. Photograph: Nick Bradshaw 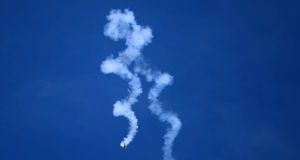 Eddie Goggins aka “the flying dentist”, in a Mudry-Cap 232. Photograph: Nick Bradshaw

The opportunity to see nosediving, corkscrewing and barrelling aircraft drew an estimated crowd of 90,000 people to the Co Wicklow coast on Sunday.

The Bray Air Show featured routines from groups including the Irish Air Corps, the Patrouille Tranchant Fouga from France and the Royal Jordanian Falcons.

After a wet start to the day, the sun emerged and the tens of thousands who thronged the seafront were able to bask in unbroken sunshine for the duration of the show.

There was a spectacular entrance from the Irish Parachute Club as the purr of two 1940s-era Supermarine Spitfire class aircraft set hearts racing. Four Pilatus C-9M turboprop aircraft proved to be among the the stars of the show, with a series of aerial pirouettes by the Irish Air Corps aircraft drawing oohs and ahs from onlookers.

There was also a tribute to the crew of Rescue 116, the Irish Coast Guard helicopter that crashed off Co Mayo in March, with a helicopter flying overhead as a poem dedicated to the four deceased was recited.

Aviation enthusiast John Hogarth, from Co Westmeath, who came equipped with binoculars, said the show lived up to his high expectations.

“I go to these things around the world, and I must say the Irish displays have really improved remarkably over recent years in particular, and credit has to go to the organisers for that,” he said.

“It was particularly gratifying to see the show of respect for the Rescue 116 crew. It was a very sombre moment, and sensitively handled. It was the least they deserved for their service.”

The decibel level raised with an appearance from a Soviet MIG-15 aircraft, followed by a booming cacophony from the JS 37 Viggen owned by the Swedish Air Force Historic Flight group.

The aerobatics continued with a seemingly gravity-defying display by the CAP 232 stunt plane operated by the so-called “flying dentist” from Ireland, Eddie Goggins, and a similarly awe-inspiring exhibition of agility was delivered by former RAF Tornado pilot Richard Goodwin aboard his Pitts Special S2S.

Much of the talk among spectators was in anticipation of one of the fiercest military aircraft currently patrolling the skies, and the Spanish Airforce F18 Hornet made an entrance befitting its reputation with a thunderous opening flypast.

Some 2,500 litres of fuel were expended in less than 10 minutes as the F18 followed up a succession of screaming nosedives and loop-the-loop manoeuvres with a delicate levitation that seemed almost at odds with the laws of physics.

The O’Neills from Blanchardstown were soaking up the sun on the promenade after the concluding parachute drop by the Irish Defence Forces Black Knights. They were unanimous about which act they preferred.

“The big bang from the fighter jet at the end was class,” said Callum (8), flanked by his mother, Monica, sister Cynthia and Ben the dog.

“Ben wasn’t too impressed with the planes roaring overhead,” said Monica. “But I have to say the whole show was just class. The children love it.”