Irish Water has confirmed that thousands of households and businesses in Louth and Meath will be without water until Thursday as it struggles to mend a mains pipe that burst last Friday. 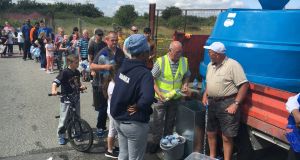 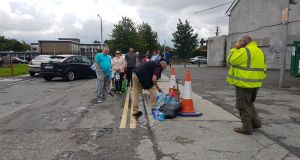 The head of Irish Water said he was as “confident” as he could be that water would be fixed for Louth and Meath by Thursday.

Irish Water is struggling to mend a mains pipe that burst last Friday impacting thousands of households and businesses. The water outage in the northeast has hit an estimated 70,000 people in the counties and in particular in and around Drogheda, Co Louth.

However Jerry Grant said it would take a number of days after that for the water supply to be restored in full. A special fittng was being made for the asbestos cement pipe which burst, he said.

Mr Grant said these problems may happen with increased regularity in the future. He said 860km of mainly asbestos cement pipe had been replaced in recent years but there was 1000km more to be done over the next few years and that was only the start, he told RTE Six One News

On Monday afternoon Irish Water said water tankers and containers are being transported from across the country , including from Northern Ireland to provide water at temporary water stations.

Irish Water and Louth County Council say repairing the leak has proven difficult because of the age of the pipe, but it is trying to maintain a steady supply to Our Lady of Lourdes Hospital, in Drogheda, Co Louth.

It said the hospital has been prioritised to maintain supply as has the commercial centre in Drogheda town in the Mell area, Donore Road, Marley’s Lane, Cement Road, Ballsgrove, Marian Park, Crosslanes, and some adjoining estates.

In order to manage remaining water it has recommenced rationing in some areas.

The leak is more than four metres underground and requires a complex repair. Irish Water said a replacement part was secured on Saturday but because of the age and infirmity of the pipe the repair was not effective. A “bespoke” solution is now being worked on but it could be up to Thursday before the part is manufactured and fitted, the utility said.

“Due to the complexit of the repair and age of the pipe and ability to withstand very high working pressures standard the modified fitting arrangements are not holding. The pipe is 50 years years old and has warped. In addition it is one of the highpest pressure pipes which makes the repair more complex,” Irish Water said in a statement.

A number of attempts to fix a major water main which supplies the Staleen water-treatment plant were undertaken at the weekend, with crews working under arc lights until midnight on Friday, and throughout Saturday and Sunday.

The leak occurred on Friday morning and has continued over the weekend with many people facing a fourth day without any water on Monday.

Irish Water said in a statementthat crews had been working since early on Friday morning to carry out repair works a the burst pipe.

Louth County Council said a rotating water roster, whereby water was being rationed to some areas was temporarily suspended at the weekend. “The overnight shut off should result in more available water in the reservoir. Irish Water must completely switch off the water in order to ensure supply to Our Lady of Lourdes Hospital in Drogheda is maintained,” the council statement said.

Irish Water and Louth County Council said three attempts to fix the burst main had failed so far. “Due to the complexity of the repair and age of the pipe and ability to withstand very high working pressures standard and modified fitting arrangements are not holding” a statement on the Louth County Council website said.

Water tankers are on the way to the Drogheda area from all over Ireland, Fergus O’Dowd, Fine Gael TD for Louth and East Meath, has said.

“At this moment water tankers are being mobilised all over Ireland and are on their way to the Drogheda and East Meath areas. Water tankers and containers from Northern Ireland Water have also been mobilised in a great show of cross-border spirit.

“Locations in the affected areas have been selected for standalone water tanks and these will be replenished all day. This means that people will be able to go to these locations and fill up water containers.”

Temporary stations set up to provide water are located at:

Stameen on the Dublin Road

Duleek at the church

Lagavoreen at entrance to the estate

Donore village at the church

Stamullen on the Bellewstown road outside the housing estate

Kenstown outside the Londis in the car park

Ardcath at the church

People have been advised to bring clean containers, and as a precautionary measure to boil water taken from these stations.

Mr O’Dowd has described the water outage as a crisis for the community.

“The situation in Drogheda has reached crisis point. These are just temporary holding measures; I am calling on Irish Water to redouble their efforts to get this situation fixed.

“They have now assured me that a bespoke solution is now being engineered. This will not be ready until Tuesday and expected to be on site on Wednesday with water services beginning to be restored on Thursday.

“This crisis is affecting people lives, and I want the people of Louth and East Meath to know that I will continue to fight their corner,” the Fine Gael TD said.

Irish Watersaid it has recommenced its programme of rationing for Drogheda from 8am on Monday:

The following areas are supplied with water from 6.00pm until 9.00pm

The following areas are supplied with water from 9.00 pm to midnight,

Irish Water customers can call the company’s 24-hour helpline on 1850-278278 or visit water.ie for more updates