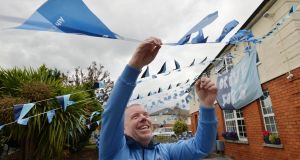 Brendan White who lives on Clonliffe Road puts up bunting in support of Dublin ahead of the All-Ireland football final at Croke Park. Photograph: Alan Betson/The Irish Times

A chronic shortage of bunting in shades of blue has prompted Dublin’s Lord Mayor to take to social media to appeal for supplies to be made available to GAA fans keen to deck their homes out in the county colours ahead of the weekend’s All-Ireland senior football championship final.

Paul McAuliffe asked already sorted Dubs fans to recommend places where other supporters seeking a means to advertise their loyalties should go ahead of the team competing for a fifth successive title on Sunday.

He said that almost as soon as he posted his plea on Twitter he started receiving bunting-related tips as well as advice on how to make it at home.

“In Dublin we have always been a bit quiet in the run-up to All-Ireland finals,” said Mr McAuliffe . “When you go to Kerry you see them all painting their sheep green and gold but you don’t see that in Dublin. This year we want the team to know that we are behind them 100 per cent.”

The Fianna Fáil politician said that Dublin City Council will be flying the colours of Dublin and Kerry along the banks of the Liffey. “I don’t think that the mayor of Kerry will be flying many Dublin flags in his county,” he said.

Last week he invited his Kerry counterpart Niall Kelleher to stay at his official residence, the Mansion House, in a letter in which he substituted all the Ss for the number 5. The invitation that was quickly accepted.

However the lord mayor said that as tension mounts ahead of the weekend, all talk of the five in a row has been banned from his official home.

He said the focus now was on getting the bunting up and the tickets in.

“There is always a struggle for tickets and there have been years I haven’t been able to get one. I hope all the Dublin fans especially those who travel long distance to see the team to get sorted.”

It is inevitable that people will turn to the internet in search of tickets but with a lot of attention focussed on touting, many of those selling tickets online are being very cagey about the prices they are looking for. Most are not advertising how much they are willing to sell for openly in case they incur the wrath of the authorities.

One premium-level ticket was up for grabs on eBay on Wednesday afternoon with the proceeds going to charity. Hours before the end of the auction the single ticket had attracted more than 30 bids and the price had reached €360 but a flurry of bids in the dying seconds of the auction produced a price of €430.

People without a ticket are being invited to watch the match on a big screen on Smithfield Plaza. The event will start at 12.30pm on Sunday and will also feature a free outdoor screening of the Cork versus Galway minor match.